Welcome words to the 2019 Victor Champion Cup by Geoff Schaller

We have a total of 105 tables competing, 420 players and this is a record field for the last decade. We have competitors from India, New Zealand and of course from all corners of Australia.

The event has been running for over 20 years and was moved to the Melbourne Exhibition Centre some 15 years ago to cope with growth.

Moved to the Bayview Eden, the event found a much more comfortable home with bar and restaurant on site and accommodation and parking. We have had a steady growth in a room that copes with 100 tables and this year, for the first time, we have run out of space.

We have a fun filled event lined up with new prizes and categories. Here are some of the highlights:

Which one’s the youth player?

With many of our younger players not competing due to exams and other youthful pursuits, my quest for a youth hand or two (by advisement of Leigh Gold, Youth Coordinator) saw Matt Smith tell me about two of the hands from round 1, featuring Matt and Phil Markey (age unknown). Matt is a current member of the Australian Youth squad. 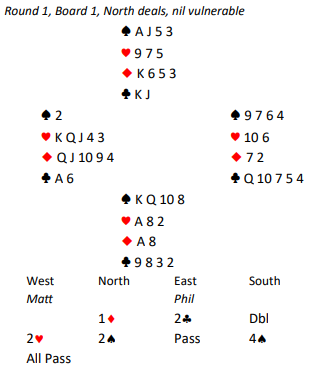 Phil’s overcall was perhaps a little optimistic, but Matt was there to help him avoid too much trouble. NS got to the right spot, but on

A, cashed two rounds of top spades, finding out about the 4-1 split. He continued with three rounds of diamonds, ruffing the third round as East discarded a diamond. He then exited a heart, and Matt cashed his heart tricks before underleading §A. Not surprisingly, declarer played §J, won by Phil’s queen. A club to Matt and a fourth diamond led to two down. Not that I was in the right contract, but the line would appear to be to score one heart, two diamonds, one club and thus six trump tricks are required on a crossruff line. 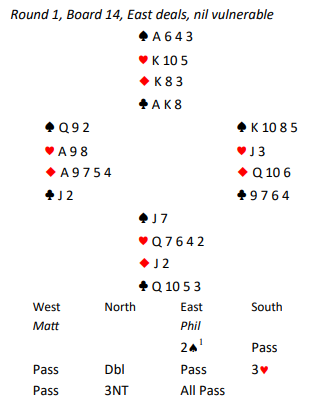 This time Phil’s opening was on a robust and shapely (sic) six-count.

Obviously the opponents were prepared to deal with the opposition’s weak openings, reaching 3NT in a flash.

The declarer play, however, didn’t match the exuberance of the bidding. Phil led a spade, and if declarer had played on hearts first after winning the third round of spades (it had gone a low spade to the Jack, queen, ducked at trick one) he could have made 3NT for the loss of two spades, a heart and a diamond.

Too hard, and declarer drifted two down after misguessing hearts. The hand is interesting in that either a diamond lead is required, or a diamond switch must come after two rounds of spades (held up) to defeat 3NT.

Full marks to Markey for his youthful exuberance!

Taking a Trick Cheaply at a High Cost by John Brown

8th October 2017
X
We use cookies to ensure that we give you the best experience on our website. If you continue to use this site we will assume that you are happy with it.Ok