One of Oswald Jacoby’s best gifts to bridge was the idea of using 2NT as a conventional forcing raise in response to a one-of-a-major opening bid. Using Jacoby 2NT works like this:

Responder’s 2NT bid shows a game-forcing hand with four-card (or longer) support in the major.

Why is it advantageous to use this method? Consider all of the major suit raises available in standard methods. This table provides an outline:

Note that similar meanings apply after a 1

Looking at this table, it’s clear that something is missing — the gameforcing raise. Jacoby 2NT takes care of this problem and does it at a lowenough level to allow the partnership to exchange further information in case slam is in the picture.

How opener proceeds after a Jacoby 2NT response

After the 2NT response, opener may now continue describing his hand using the following set of conventional responses: A three-level rebid in a new suit shows a singleton or void in that suit. For example:

rebid shows a singleton or void in clubs. This may help responder visualize a possible slam.

A four-level response in a new suit shows a good-quality five-card suit. If, for example, opener held

. Yes, you do have a singleton heart and you could rebid 3

to show it, but telling partner about the nice diamonds is more important, so 4

is the better rebid.

Jumping to four of the agreed major shows a minimum opening bid without shortness or slam interest. In the auction 1

A 3NT rebid shows a sound opening (14 or 15 HCP) without shortness. Note that some
matchpoint players consider this passable.

Rebidding three of the major shows slam interest and typically denies shortness. With a hand such as

. After a Jacoby 2NT response, rebid 3

to show a strong hand without shortness. 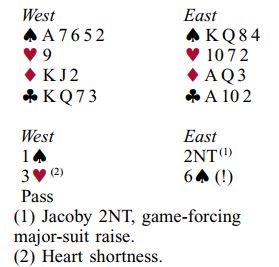 East’s final bid is not very scientific — a grand slam might be missed if opener had a heart void instead of a singleton, or 6

might be too much if opener has a singleton heart honor such as the king — but it will be on target much of the time. When opener reveals the heart shortness, responder knows that opener’s values will be in useful places, so the slam should have a good play.

The Jacoby 2NT response is game forcing and promises fourcard support. With only three-card support, responder makes another call first and then raises partner’s major at the his next turn. For example, holding:

. Don’t use Jacoby 2NT, since partner will think you have four spades. This can be significant, so be sure you paint an accurate picture of your support length.

Also, many players prefer to use Jacoby 2NT with hands that do not have shortness (singletons or voids). This helps opener evaluate his hand better. Not every partnership has this agreement, so it’s important to discuss this point with your partner.

The above description of Jacoby 2NT is one that many partnerships employ, but you should be aware that there are many other variations on the market. This description should be taken as a starting point for new partnerships. The Official Encyclopedia of Bridge has some good suggestions for alternative structures.