England’s Colin Porch played this spectacular hand at the annual Killarney Congress, perhaps the best known of the Irish events. It helped him to capture the mixed pairs title in partnership with Amy Cherry. Try it as a problem. After East has opened a weak Two Spades South finds himself in Six Hearts. West leads the nine of spades.

You can see eleven tricks via two spades, six hearts, one diamond, one club and one club ruff. The only chance for the twelfth, apart from the remote chance of a singleton king of diamonds, is a squeeze against East in spades and diamonds.

East is marked with the queen of spades and he will need to have one of the diamond honours. If it is the jack, declarer can lead the queen of diamonds from hand, forcing West to cover, and transferring the menace to East. Having worked that out – perhaps not too difficult- it’s important to realise that East must have the ace of clubs, for if West has that card a second spade will spoil the ending.

Then you need to appreciate that you must preserve enough entries to hand. You win the first trick with the ace of spades and draw one round of trumps. Then you play a club to the queen and East’s ace. East returns the jack of clubs so you win and play the queen of diamonds. West covers so you take the ace and return to hand with a trump. Now you can ruff a club and still get back to hand with a trump, something that would not have been possible if you had drawn two rounds earlier on.

Time to look at the full deal: 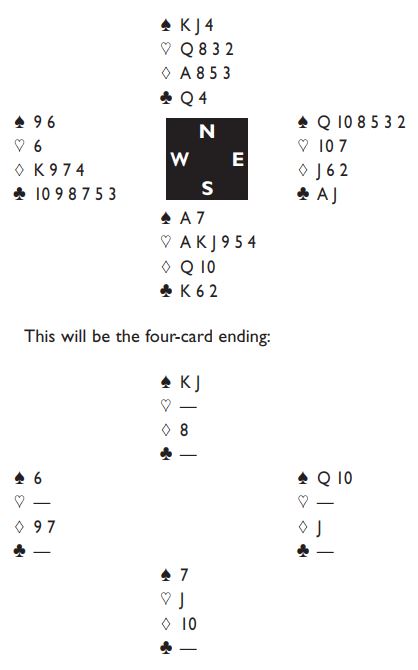 The play of South’s trump is a heart breaker for East.

Best Bidding of the Event? by Fernando Lema