COUP OF THE MONTH #8 (June 2018) was the Devil’s Coup, described by Brian Senior as “a rare play – so rare, in fact, that I don’t recall ever having brought it off in all my years of bridge.”

The following hand was written up in the IBPA Bulletin, January 2016, having been played at the European Championships in 2015.

I present a Devil’s Coup, executed by Geir Brekka: 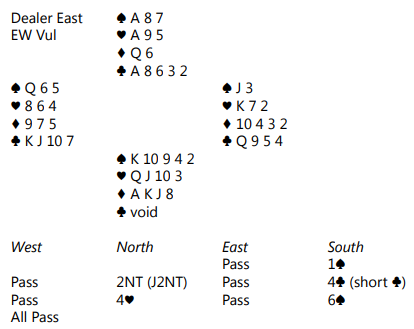 A and played the

A (discarding a heart), club ruff, diamond to the

Q and another club ruff. He then played high diamonds (discarding a heart from dummy on the third round) and, on the last one, West wrongly elected to discard a heart, so dummy’s last heart was thrown. Declarer trumped a heart, then a club (trumping low) to reach this position: 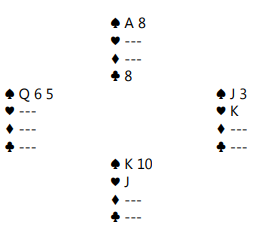 J, West had no adequate answer. If he trumped high, Brekka would overtrump, then finesse the

J (or even trump the club). If he trumped low, dummy over-ruffs, and declarer makes the last two tricks on a high cross-ruff. With a trump loser and the heart finesse failing, he had made all 13 tricks!