“There is a fifth dimension beyond that which is known to man. It is a dimension as vast as space and as timeless as infinity. It is the middle ground between light and shadow, between science and superstition, and it lies between the pit of man’s fears and the summit of his knowledge. This is the dimension of imagination. It is an area which we call the Twilight Zone.”

The Twilight Zone is an American anthology television series created and presented by Rod Serling, which ran for five seasons on CBS from 1959 to 1964. Each episode presents a stand-alone story in which characters find themselves dealing with often disturbing or unusual events, an experience described as entering “the Twilight Zone,” often with a surprise ending and a  moral. Although predominantly science-fiction, the show’s paranormal and Kafkaesque events leaned the show towards. The phrase “twilight zone,” inspired by the series, is used to describe surreal experiences.

In bridge, the fifth dimension allows players from different ages to sit at the same table.

Those who are still in activity and those who are in an alternative space to ours and to appreciate their new games and forming couples  pairs that only the time interval per kidney prevented them from building.

I’ll bring you a match from the fifth dimension.

Of the European languages, German is certainly one of the most complicated, but, at the same time, one of the most precise features of being  able to make express a complex concept with only one word.

“Schadenfreude” for example, indicates “The pleasure caused by other people’s misfortune” and “Weltschmerz” synthesizes “The unpleasant feeling that is being felt in front of the evils of the world”.

In bridge, every time that we send down the opponents, all of us try a good dose of “Schadenfreude”, in the same time he blinks into the chair by an unavoidable “Weltschmerz”.

Sabine Aucken, in south, found herself playing in “fifth dimension” with Michel Bessis against Mahatma Gandhi and Alvin Landy:

Sabine Auken (Zenkel) is a German bridge player, one of the most strong women of the world. Two gold medal medals and three argent in Venice Cup.

Her partner, in bridge and now also in life, is Roy Welland and toghether are probably the best mixed couple in the world.

Michel Bessis: in north, was born in Tunis September 30, 1952 and is the head of the family of a formidable team of Bridge! His wife Veronique is one of the strongest global players among those in activity, and his two sons Thomas and Olivier are following in the footsteps of their parents.

After married Véronique, he started play, write and, above all, to teach at the Bridge Club Saint Honoré in Paris in collaboration with his wife.

Among the many international titles captured there are three gold medal in the Mixed Tournament of Biarritz. As non-playing captain led the Ladies Team of his country to win the European Championship in 1983 and the European Senior Teams Championships in 2018.

As a player, Michel is a World Life Master, that so as not to lose the habit of family, won the European Team Championships in Antalya in 2007 playing with his son Thomas and two Israelis player! and he repeated the enterprise in Louisville winning the 2nd Buffett Cup and the Vanderbilt Cup and the John Roberts contest of 2010.

He has also won three times the Italian Teams Championships in 2012, 2013, 2017. In 2014 the Cavendish Monaco Teams and the World Bridge Series Senior Teams. 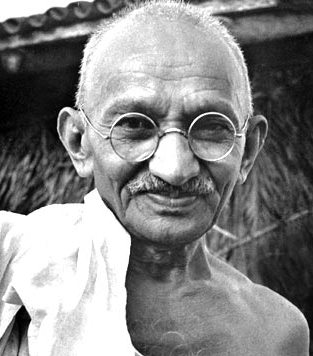 Mohandas Karamchand Gandhi: (2 October 1869 – 30 January 1948) in west, was an Indian lawyer, he employed “non violent resistance” to lead the successful and in turn inspired movements for civil rights and freedom across the world. The honorific Mahātmā (“great-souled”, “venerable”), first applied to him in 1914 in South Africa, is now used throughout the world.

Gandhi was a student in London and he came in touch with Wist and Bridge. He never became a real card player, but he was wearing the bridge to illustrate the relationship between fate (karma) and human work (dharma).

One of his most sentences and also applicable to our game is: “Live as if you have to die tomorrow, learn as if you never die”. 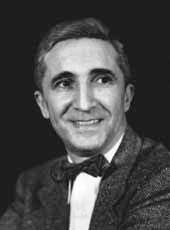 Alvin Landy: in east, was born in Cleveland nel 1905 and suddenly dead for a heart attack in 1967.

He was an American bridge administrator and player. He won a Reisinger (1936) and a Spingold (1949), but it was mostly a manager in A.C.B.L.  and treasurer in World Bridge Federation.

He went to the history of the bridge for “Landy Convention”, a 2

interference after opponent’s opening of 1NT to indicate a two-suited hand hearts- spades.

Sabine, “Immer Fertig” (always ready) to make the best technical manoeuvres, immediately realized that she had at her disposal 5 Diamonds, 2 Hearts, 3 Spades and 1 Clubs, with the Ace of Club in good position.

If West has also Queen of Clubs the contract is carried out. But if the Queen is in East…

After a moment of reasoning, Sabine notices a possible squeeze, heart-clubs against East. She thought about all the distribution. West has five or six spades, Ace of clubs, and other cards: perhaps Queen of hearts may be singleton, perhaps doubleton.

2 to the King and immediately

A of Gandhi and again Clubs. After this return, Sabine decided that

Q was in east, so played them with King of Clubs. She’s played

A, three Spades, four Diamonds and

K for this ending with three cards:

2 est was inexorably squeezed. She was happy how slam had taken home, but she knew that this happened because Gandhi had picked up with

A, for this final situation:

And she would have played

Sabine was thinking: “It is always done by playing carefully? Are we going to be in balance ? Ach so, Menschenskind ! (Oh, my God !) But I have some hope to improving because my partner in the other room is Giorgio Belladonna…”

In the other room, Giorgio Belladonna with Marisa D’Andrea against Antoine Bernheim and Giovanni Albamonte.

Alan Truscott described him as “a cheerful extrovert” and “normally unflappable at the table”. He won how much no one has been able to do, but every agonist commitment like that of life lived.

Marisa D’Andrea Baffi was one of only four Italian women bridge players to have won the title of World Women Grand Master (the other three are her sister Lucia D’Andrea Capodanno, Anna Valenti and Marisa Bianchi). She also has been one of the best women players in the world for the past 70’s and 80’s.

At the national level she has achieved many titles among which the 9 times the Women Teams and 3 times the Mixed Teams.

Antoine Bernheim: Born in 1924 in Paris he is a renowned French banker who comes from a family of large industrial textiles. For many years he has served on the Boards of Directors of Assicurazioni Generali, Mediobanca and several other large insurance and financial companies.

He graduated in Law and Science, in 1995 he received the decoration of Grand Officer of Merit of the Italian Republic, in 1997 the National Commander of the Order of Cruzeiro do Sul, in 2006 Commander of the Order of Arts and Letters and 2007 of the Grand Cross of the Legion of Honor. A big fan of Bridge has many times sponsored some of the most important internationals events and he often played with the French champions. He died on June 5 of 2012.

Giovanni Albamonte was born in Sicily in 1972 but had moved to Milan to work in computer science. He was an excellent bridge player and a great junior prospects who was trying to balance work and play, something that can really only a few successfully.

His international honors include a National Team Juniors European Championship in 1992 and two silvers in the EC Junior Team in 1993 and 1996. At the national level he won the Junior Team (1996) and the Pairs Championships (2006). At the beginning of 2011 a terrible illness has deprived us prematurely of his  smile that reflected his character and that made him loved by everyone who knew him.

Giorgio Belladonna does not play the Ace of Clubs and Albamonte sets the game for a throw-in play.

He played five Diamonds, King of Clubs, Ace of Spades end than Hearts to the King, but on this trick Belladonna discarded…… the Ace of Clubs…….! condemning the contract inexorably. In this case, playing Clubs would have entered East, not West.

One down and a perfect example of “Schadenfreude” and “Weltschmerz”.

The Scissors Coup by John Brown