When an opponent plays something that might or might not be a true card, it’s best to believe it.

“I ran into a desperately unlucky trump break – the suit was 3-2 with the finesse right.”

My counterpart at the Daily Telegraph was not being entirely serious – he had in fact run into a simple yet devilish false card from his opponent, Gerald Tredinnick. 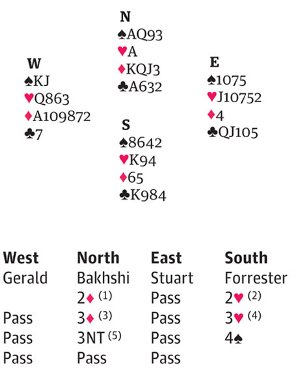 “, showing a wide variety of hands, one of which might be…

, in which case North would pass, but since he in fact had …

(3) a strong three-suited hand with short

, he bid the suit below his singleton, whereupon …

, East put in the

10 and South won with the

K. It seemed a dull hand – Forrester would take the

finesse, draw a second round of trumps, knock out the

A and lose a trick in each suit apart from

as the first stage, West played not the

K were West’s only

, the contract might still be made with favourable splits in the other suits, but it would be fatal to draw a second round of trumps – that would allow East to draw two more rounds when he obtained the lead, which would be hopeless.

So Tony left the

K. West won with the

A, gave his partner a

ruff in return and played another

to promote his twin brother’s