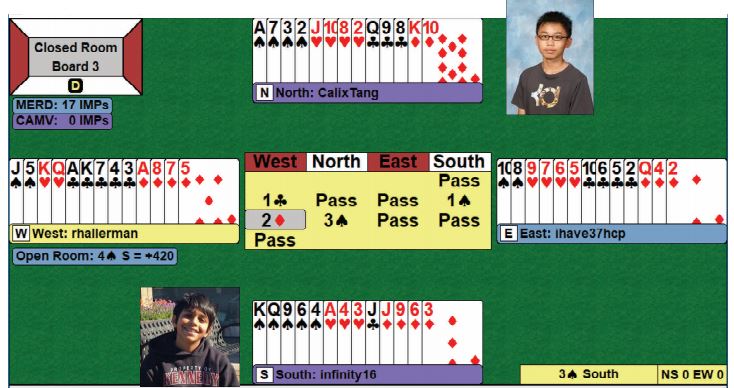 In the Closed Room, North/South stopped in a reasonable part score. South has a marginal opener … eleven high card points including a singleton jack of clubs, but still two quick tricks (the

KQ). The decision to open or not to open is close. Most players these days will choose the aggressive route… but again, it’s not vulnerable and it’s borderline. The win/loss ratio is 6 IMPs either way. Infinity16 (Aman Desai) chose the low road and passed. Hallerman opened 1

and it passed back to Desai. Desai bid 1

showing 16+ HCP and 5/4 in clubs/diamonds… a very descriptive bid that still did not thrill his partner holding a practical Yarborough, even with a four card fit in clubs. Tang jumped to 3

, invitational, and bought the contract there. To make four, declarer has to get the diamond suit right. The

J was led to the queen and trump were extracted. Desai ran the

J to the queen with West. West continued hearts, declarer winning the king with the ace and continuing a heart to the ten in dummy, West discarding a small club. The

9 and was ruffed, West discarding a diamond. The

J was won with the king and West, trying to defeat 3

, cashed his diamond ace. At this point, declarer had ten tricks and scored up 170. 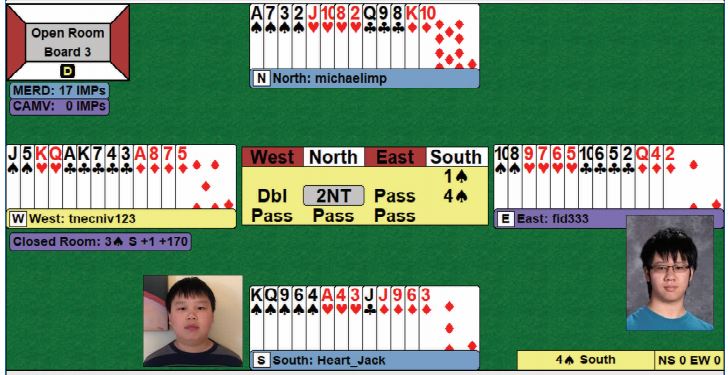 . West doubled (flawed because of his doubleton heart but too many values to sit idly by); North bid 2NT (Jordan… limit or better in spades); East passed; and South, in a leap of faith, jumped to the game. The opening lead was the

K. Even after a discouraging signal, the

A was continued and ruffed. Trumps were drawn and a small heart was led toward the

JT82. West won his king and continued with the

A and played a heart to the ten and jack, discarding a small diamond. The

Q was cashed discarding another diamond… Declarer was at the crossroads. In game, he had to get it right. Ethan led the

9… both opponents pitched diamonds. He led the

9 and West hopped with the ace, making Ethan’s life easy. On the auction, he might very well have figured it out on his own, however, there are no guarantees.

In IMPs, you always want to give declarer the problem, not solve it for him. Ducking is the better part of valor here. Had it resulted in an overtrick, it would not have mattered to the scoring, however, defeating the contract is paramount. A sigh of relief from declarer and on to the next hand!

Problems on Conventions By Alan Truscott

The Sound of Silence by George Retek (CAN)