British author Victor Mollo has delighted us over the years with his mythical Griffins club and the characters who inhabit it. They are lorded over by the Hideous Hug, a very fine technical player who… 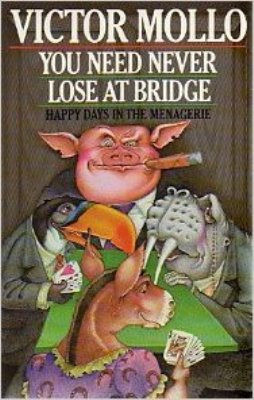 British author Victor Mollo has delighted us over the years with his mythical Griffins club and the characters who inhabit it. They are lorded over by the Hideous Hug, a very fine technical player who is not above taking every advantage he can of the less fortunate members.

Their exploits have been described in two books and hundreds of magazine articles. Here is a typical example of the Hog in action.

The Hog, sitting West, heard Papa the Greek became declarer at four spades after the Walrus had opened the bidding with one heart North’s Jump raise in three spades was about a king light. The opening lead was routine.

When two rounds of hearts went through, the Hog realized that to defeat the contract the defenders would need a trump trick and a diamond. The danger was that East afraid of yielding a ruff and sluff would shift to a diamond, which would allow declarer to pick up the suit. Declarer, ruffed the third heart, cashed the king of clubs and crossed to the ace. He led a trump to the ace and continued with the jack.

To these two trump tricks, West followed with first the eight and then the three. The Walrus won the second trump and led a fourth heart. Eventually, declarer had to yield a diamond for down one.

‘Fortunately’ explained the Hog, “that Walrus is eminently bamboozable, for although he knows precious little about bridge, he knows all about points, peters, echoes and signals of every sort. So all I had to do was play the eight of spades before the three, proclaiming three trumps and a desire to ruff. Thereupon, to promote my mythical nine of spades, he duly led a heart and all was well “

The Plan XXXVII by Tim Bourke

12th January 2018
X
We use cookies to ensure that we give you the best experience on our website. If you continue to use this site we will assume that you are happy with it.Ok