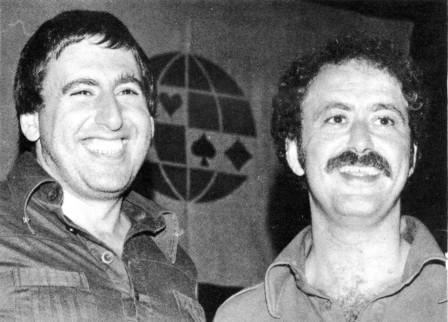 The hand is an excellent illustration of the principle that a player should not allow himself to fall into the habit of making so-called automatic or routine plays.

This deal occured in a national team championship 1977. At the first table, the bidding went as shown, and South got to five diamonds.

East’s three spades bid, in response to partner’s take out double, was strictly pre-emptive and was basically an attempt to cramp the opponent’s bid or space. It indicated a long spade suit in an otherwise worthless hand.

West was Peter Nagy, playing with Eric Kokish, both well known Canadian stars. It did not seem to Nagy that he would defeat the contract by making the routine opening lead of the king of spades. In fact, had he done so, declarer would have made five diamonds easily, scoring four diamonds, six hearts and a spade ruff for 11 tricks.

Instead Nagy made the imaginative and highly unorthodox openning lead of the four of spades, Kokish won dummy’s eight with the nine, and it did not take him long to figure out why his partner had underled the A-K of spades. He shifted to a club, and Nagy cashed the A-Q of club!! to put the contract down one faster than declarer could say, “Good play.”

The hand is an excellent illustration of the principle that a player should not allow himself to fall into the habit of making so-called automatic or routine plays. In the vast majority of deals, the king (or ace) of spades would be the natural opening lead, and no one would give: even a moment’s thought to any other lead.

But here Nagy demonstrated s0 well, he not only thought of the four of spade. as a posible opening lead, but had the courage of his conviction to lead it. His reward was a gain of 700 points.