This deal occurred at the 1962 Nationals, and at one table the bidding went as shown.

This deal occurred at the 1962 Nationals, and at one table the bidding went as shown.

West’s four notrump bid asked his partner to bid clubs or spades. East duly obliged with five spades, raised by West to six after South bid six diamonds. When this came around to South he decided to venture seven diamonds. At this point, while West was cogitating whether to bid seven spades as a sacrifice, East doubled out of turn — and promptly led the ace of trumps to confirm the soundness of his double!

Naturally, the tournament director was summoned. He ruled that North/South could continue bidding in turn and, furthermore, that the ace of diamonds was a penalty card. (If a defender improperly exposes a card it becomes a penalty card which must be played at the first legal opportunity.)

South thereupon ran to seven no trumps. He recognized that seven diamonds was hopeless, but thought he might be able to make seven notrump with the aid of the exposed card.

West led a spade. Declarer finessed the jack and then scored four heart tricks by trapping East’s king. South had been hoping that East would show out of hearts and be forced to discard the ace of diamonds, but he had no such luck.

Declarer now led a club to dummy’s king and cashed the A-K of spades as East continued to follow suit. Finally, South played a club to the ace, prepared to concede down four, but at this point East’s luck ran out. Having no more clubs, he had no choice but to discard the ace of diamonds, and the slam come rolling home!!!. 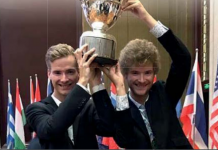 The Plan X by Tim Bourke

24th November 2017
X
We use cookies to ensure that we give you the best experience on our website. If you continue to use this site we will assume that you are happy with it.Ok