Papa and the Hideous Hog exchanged hostile glances. They had known in their bones that they would cut together, for it wasn’t their lucky day.

Papa and the Hideous Hog exchanged hostile glances. They had known in their bones that they would cut together, for it wasn’t their lucky day. The Stock Exchange was bad. The weather forecast was ‘little change’ and to add insult to injury, the new barman had mixed them up, mistaking one for the other. “What are we coming to,” snorted the Hog, ‘when an imbecile, who addresses me as ‘Mr. Papadopoulos’, is appointed to a position of responsibility?” “Did the oaf imagine,” spluttered the Greek indignantly, “that even if I were H.H. I would admit it in public?” “Don’t play every hand, I beg of you, Themistocles,” pleaded the Hog as he sat down opposite Papa. “I know you need the practice, but spread the risk.” Before Papa had time to put on a look to match his feelings, the cards had been dealt. For a time the game went, as it were, with the service. Whoever was first to speak bid notrumps, and part-ner gave way stoically. Timothy the Toucan and Karapet Djoulikyan, the Free Armenian, collected their fifties and the odd hundred in silence. They had too much respect for their betters to double them in part-score contracts. Slowly each side crept up to game.

Then came this hand: 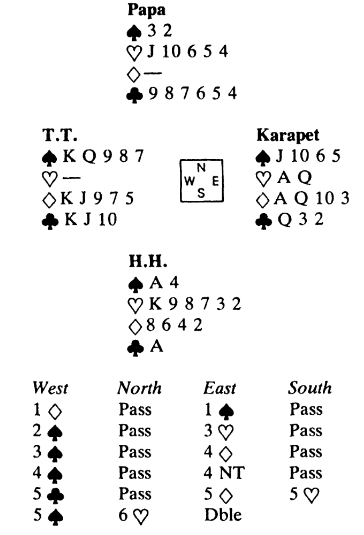 Even at the far end of the room the kibitzers could hear the Hog gnash his teeth. Up to Papa’s 6

, bid everything had gone according to plan. So long as the hand was to be played in spades, H.H. had no worries. He would lay down the

A and lead a diamond, expecting to find partner with one diamond or none. Then, when he came in with the

A, he would lead a second diamond, giving Papa a ruff and ruffing the club return himself. It promised to be an enjoyable defence.

appeared to be unbeatable, and when it looked as if that would be the final contract, the Hog came in fearlessly with 5

. The sacrifice could hardly be expensive, for in addition to his shortage in diamonds, partner was marked on the bidding with good heart support. The Toucan’s 5

bid was a pleasant surprise, and H.H. was gloating discreetly when Papa spoilt everything by bursting into 6

“Are you suggesting,” snapped the Hog, “that I haven’t bid your hand fully already? Have you anything over and above my bid? And anyway, since you haven’t supported my suit for some years, why should you choose to create a precedent on this particular occasion?”

“Only 1 point,” broke in Walter the Walrus in shocked tones.

The Toucan led the

The Hog won with the ace, laid down the

A and ruffed a diamond in dummy, then a club in the closed hand. Crossing to the table with a second diamond ruff, he ruffed another club, setting up dummy’s

A third diamond ruff took him back to the table, and now the defence was powerless. In desperation, Karapet ruffed a club with his

Q, but H.H. overruffed, returned to dummy by trumping his last diamond and played another club, throwing on it his

‘I might have known it,” sighed the Armenian. “If I pick up a good hand something’s bound to go wrong. It’s the curse on our family, the evil spell cast on the Djoulikyans. Did I tell you what happened to me on Thursday? I held the . . .”

“Why worry? interrupted the Hog, whose temper had improved markedly. “You made your ace of trumps, didn’t you? What more do you want?”

This remark struck him as very funny. Chuckling to himself and grimacing amicably at the kibitzers, he proceeded to write down a hand. The rubber was over. Papa rose from the table. “I am sure I know your hand,” he said, directing at the Hog a look of derision. “You were South and played brilliantly. Or perhaps you played brilliantly in some other position. Don’t forget to show the hand to the barman.”

Maneuvers to Learn to Count the Hand by Tim Bourke

The Ruffs are in the Right Place by Charles Goren

10th February 2018
X
We use cookies to ensure that we give you the best experience on our website. If you continue to use this site we will assume that you are happy with it.Ok