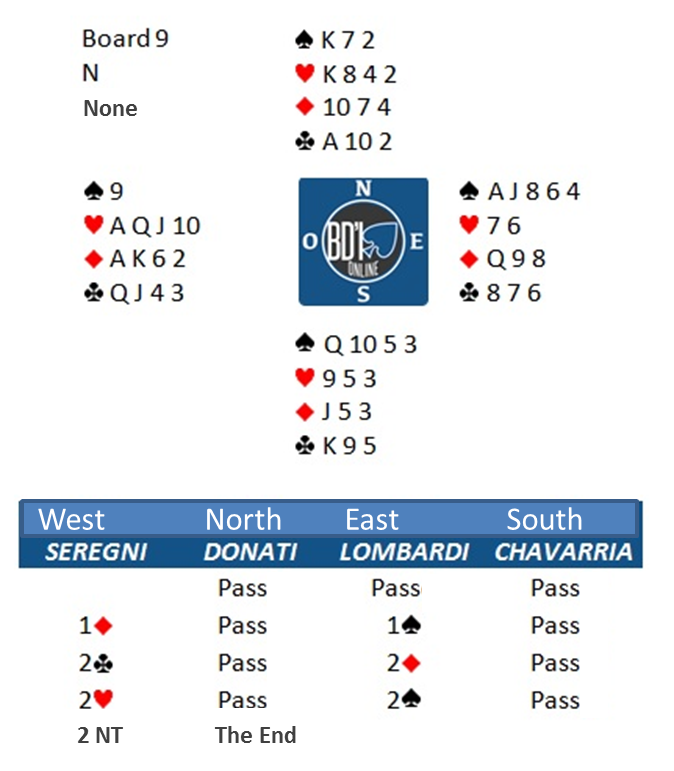 K: the goal of the attack was to: not let declarer to win with a singleton honor and to play spade towards my partner, Margherita Chavarria (for example, singleton

A1086 in South would have guaranteed four trickes).

Q, an entry to the table. The play went this way and I could take the second heart to cross another spade for the jack and the queen (West played a club). My partner after winning the trick, returned a club, declarer played her jack and I won with the ace, and played a spade..

At this point, the declarer had eight theoretically tricks (a spade, three hearts and four diamnods thanks to the 3-3), but still she has to discard when South plays the

10. She can not play a club because she now has

Q x, so she had to discard a diamond, forcing her to give two clubs in the final after South’s heart return: this is an example of squeeze over declarer by the defense.

The contract could have been accomplished by playing a second heart from declarer’s hand as the defense spades would not have effect: the

Q would have remained in dummy to ensure two additional spade tricks for E / W. But she would have missed the not-insignificant chance of the heart king third, that would have guaranteed eight tricks (a spade, four diamonds and three hearts) without any particular effort.

Jump Rebid in a new Suit by Andrew Robson