MOST PLAYERS understand the desirability of finding a fit. By a fit they mean knowing they have eight cards in the suit, making it suitable to be trumps. However a partial fit improves the hand. Suppose partner opens 1 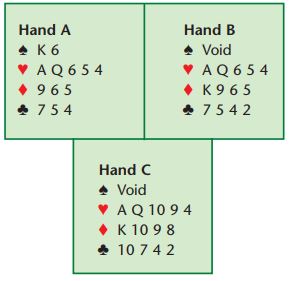 In each case your choices are 2

My starting point is to imagine responding 2

I am forcing him to bid again, and he might be forced to rebid 2

on as poor a suit as

A-J-4-3-2. I would have to pass this. It seems to me that we have the majority of points and it would not be sensible to leave him in a spade contract with a trump suit of

If I respond 1NT, I am not forcing him to bid again. If he chooses to rebid 2

he will have at least a six-card suit. With a misfitting 9 points I would do better to keep the bidding low and give him an opportunity to pass. A 2

response seems fine with Hand A. If he rebids 2

, I can pass with a clear conscience. If I respond 2

with Hand B, I am really stuck if he rebids 2

. It is better to respond 1NT, keeping the bidding low on a misfit.

However, suppose he rebids 2

over my 1NT response. We now have at least a nine card heart fit! I will now evaluate my hand as six losers in support of hearts and jump to 4

. Note the way that my initial caution with a misfit is replaced by optimism. Good players re-evaluate their hands as more evidence surfaces. But I can hear dubious noises about Hand C.

Isn’t there too great a chance of missing game if I respond 1NT? Perhaps, so I respond 2

but I don’t then pass a rebid of 2

because I have upgraded my hand with so many intermediate cards. If I am treating it as worth 10-11 points, I will be consistent and continue with 2NT.

Principle 1: With a misfit, keep the bidding low. Prefer a bid that allows partner to pass to a bid that makes him rebid.

Principle 2: With 9 points and a singleton or void in partner’s suit, don’t change suit at the two level and then pass when he rebids his suit.

Opener also should be constantly re-evaluating his assets. You open 1

with the West hand in Layouts 1 and 2. Perhaps you regard the hand as borderline between rebidding 2

. Your fit (or misfit) with partner’s response should help you decide. 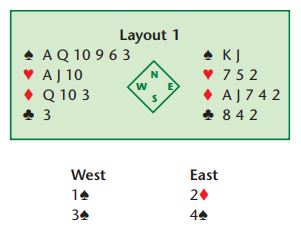 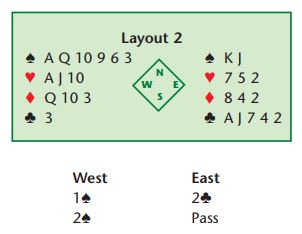 is quite high enough! Note that West’s level of rebid was influenced by how well his honour cards fitted partner’s suit. We can talk about a fit even if we are not sure it is an eight-card fit, and even if we have no intention of making the suit trumps.

It is worth noting that if partner has a minimum two-level response he should have honour cards in the suit. With a poor suit and only 9 points he should prefer a 1NT response. Note, also, that three small cards in partner’s suit is not particularly attractive: 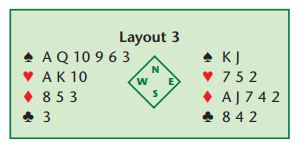 is not a good contract.

The ability to keep the bidding low with misfits is an easy source of good scores for experienced players. Holding Hand D, you open 1

and partner continues with 2

At club level 2NT would be the common, but very ill-advised choice. The argument would be: ‘He guards the spades: I guard the other three suits’. Perhaps, but to play in no-trumps you need to make tricks, not just stop your opponents making them. 2

shows a weak hand with a goodish six-card suit. You can almost envisage layout 4: 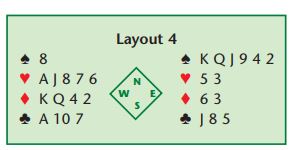 What is the correct contract in Layout 4? Clearly 2

! No-trump contracts have no chance whatsoever because there is no entry to East’s spades. West must pass 2

With a weak, misfitting hand arrange for the auction to end as soon as possible!

Principle 2: If one player has a good suit but an otherwise weak hand, that suit should usually be trumps. Otherwise there is likely to be no entry to the long suit.

I will end with a wonderful story of one of the world’s top players, learning the game at the age of 12 by playing with his father. Each of them had a long suit. The auction went:

Opponents doubled and Junior was furious, demanding an explanation from Dad. Dad was exceedingly laid back, answering: ‘I thought 7

would save four rounds of bidding!’

Doubling after your partner overcalls at the one level and your...