The Funbridge Challenge Cup was created on the initiative of a coaching group primarily as a competition for players of the Czech Republic belonging to the youth categories. The intention was to offer young bridge players an online competition in which they can compare abilities and skills. At the same time, the juniors were not tied to partners or opponents, as the platform for playing was Funbridge. Since Funbridge is played only with and against robots, in addition to the possibility of playing the game at any time, the players were not so limited in time.

30 players of youth categories from the Czech Republic participated in the competition. The Funbridge Challenge Cup in its current form is open to all Czech juniors, regardless of performance level. The only condition is the need to use the Funbridge application. Its subscription is sponsored by the Czech Bridge Association for whom this tournament is a visible output of its use.

The qualification consisted of 6 rounds, in which the pairs competed with each other (according to the current ranking, the Swiss system). The goal was to achieve 2 winning challenges, or at 1.5:1.5, the state of the match was marked as a draw. The play-off followed, when the starting field was divided into 4-member groups and the semifinals and finals took place. There was a change in the number of challenges, when it was necessary to achieve 3 winning challenges. For greater dynamism, however, in the case of draw challenges, it was enough to get a score of 2.5:0.5, respectively 2.5:1.5 to win.

What makes this format specific?

This is a challenge, which means either a win or a loss. The Swiss system, which also takes into account the IMP difference, of course modifies this to some extent. However, the player who plays the challenge second in the order has the opportunity to see how his opponent did in the particular board after the game. This format allows tactics and shows how elimination matches can be approached in general: 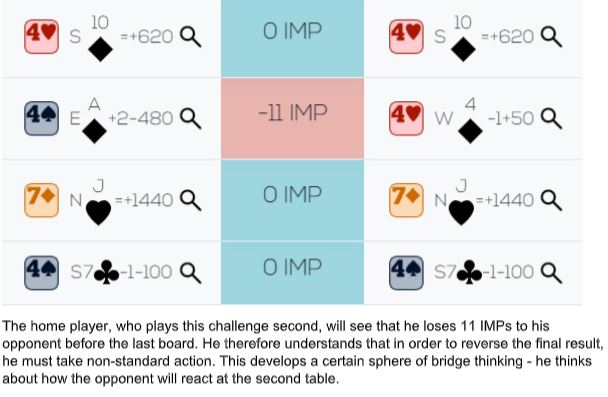 The home player, who plays this challenge second, will see that he loses 11 IMPs to his opponent before the last board. He therefore understands that in order to reverse the final result, he must take non-standard action. This develops a certain sphere of bridge thinking – he thinks about how the opponent will react at the second table. 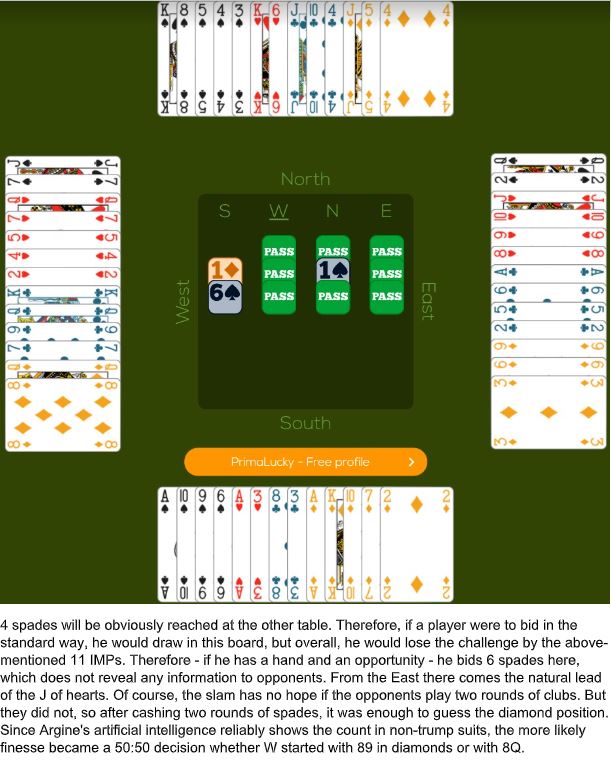 The qualification was dominated by Michal Veselka, who was the only one from the entire starting field to win in all rounds. He was accompanied to the final A by Barbora Kupková, Michael Botur and Vojtěch Klhůfek. Michal Veselka and Vojtěch Klhůfek competed in the semifinals, the second one surprised with a close 3:2 victory on sets and reached the finals. Michael Botur won the match against Barbora Kupková with a bigger difference (3:1 on sets), so the commitment for the finals was obvious. 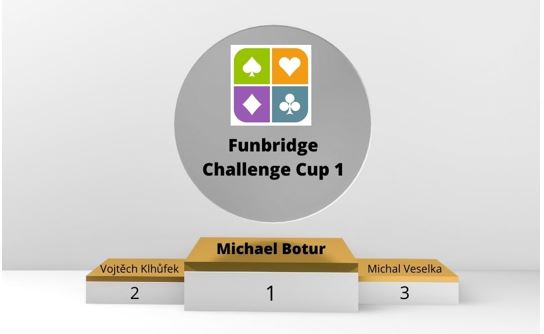 The battles for the final placement took place. Michal Veselka won 3:0 against Barbora Kupková and thus won an imaginary bronze medal. The final was dominated by the more experienced Michael Botur who also won 3:0 and became the winner in the 1st series of the Funbridge Challenge Cup.

Winners of other finals: 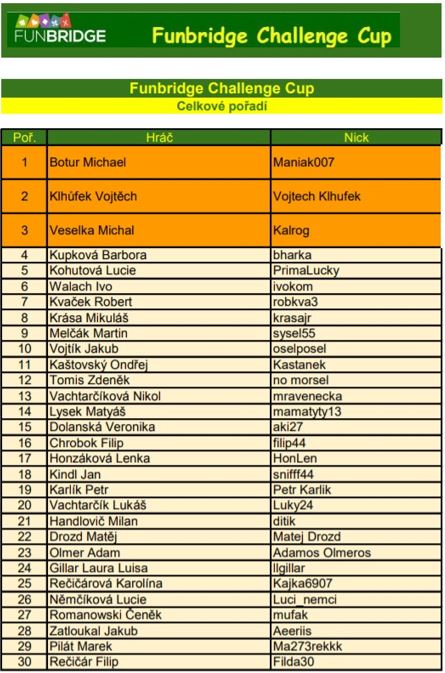