Some years ago, Helgemo was playing in the US with Edgar Kaplan and made a seemingly impossible contract through a sensational piece of card reading. In fact, his play was declared by some bridge journalists as the Hand of the Century. 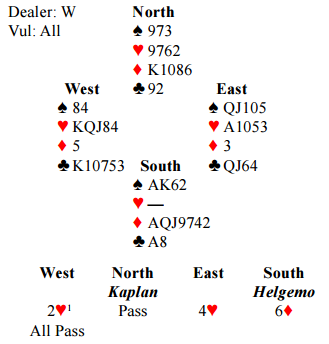 West lead the heart king, ruffed. Helgemo drew the outstanding trumps with the Ace. He needed three spade tricks to make his contract but after the preempt he didn’t want to bank on a 3-3 spade break by playing the AK. Instead he advanced the

2, West followed with the

J from East, who immediately returned the

5, which Helgemo ducked around to dummy’s

9. He could now discard dummy’s losing club on the long spade in his hand. Had East not returned a spade, Helgemo was planning to cross to dummy and run the

How did Helgemo come up with this play? When the first round of spades was played, West played low without thought. Holding, say 10xx, he would at least have momentarily considered taking the trick. Secondly, East won the trick with the Jack. Helgemo correctly assumed East had the ten from West’s play so why would East try to false card with a holding of J10x? It was more likely that he in fact held QJ10x and that a declarer of Helgemo’s ability would get the hand right.

Thirdly, why did East return a spade instead of a club, with those two rags in dummy – because he wanted Helgemo to make a decision about the spade suit immediately.

Commentators at the time said Helgemo displayed three important talents necessary to play the spade suit the right way on this hand – imagination, psychology and guts!

Continue or switch? By August Boehm

There are Two Sides to Every Question by Terence Reese