Stig Holmquist wrote:  “All textbooks teach that an 8-fit should be the norm in major suit contracts. But some players seem to like the Moysian fit, 4-3. Is there a recommended defense against such players?  How popular is the Moysian fit?”

1°) Indeed an opponent playing a Moysian fit should is committing a very serious offense against the spirit of the game especially when ruffs can be established from the short hand. This is not fair !

I think you should focus on the Super-Moysian fits. Some opponents playing a 4-2 fit or even a 3-3 fit those are really the worst, they usually open with FOUR quick tricks (because they know about Hand Evaluation) and are able to establish SIX ruffs when you fail to lead a trump. Looks like magic doesn’t it ?

Warning : you should eliminate the 2-2 fit they do not play well even with good trumps

If you play the Moysian or super-Moysian this is the rule of thumb you must be aware of :

I hope it helps indeed we need simulation. 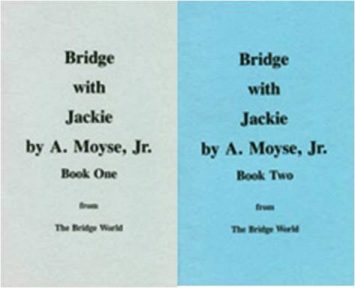 2°) Moysian and Super Moysian fit are very popular among strong players and some systems are designed to discover the Moysian’s and play it (Usually pays more  than 1NT) but it requires a very long practice it is usually based on a blackmail technique (ruffing from the short hand or drawing trumps and cash your second suit).

Compete more cautiously against single raise auctions that are potential Moysian fits. You can no longer assume that auctions like 1M-2M and 1m-1M-2M promise an 8-card fit hence when you overcall and especially when you balance the risk of walking into a misfit is increased.

It’s not that “some players seem to like the Moysian fit” it’s rather that if you don’t have an 8-card fit in a major, a 4-3 fit may be a better place to play than an alternative minor suit fit or in NT. Last week my partner and I played in 4S on this layout:

Given that it was matchpointed pairs, so making 4S would at least equal and usually beat anyone playing in 5D, this is clearly the best game.

All I can say is don’t bid too aggressively against opponents who overcall frequently on 4-card suits (or who consistently overbid in auctions beginning with a take-out double). There’s nothing worse than overcompeting to the 3-level in your own 8-card fit, only to find  out the opponents didn’t really have a fit despite their bidding, and in fact neither side can make anything on this hand.

some people are WILLING to play a Moysian, recognizing that sometimes a short trump fit will play when no other contract is better. Nobody actively seeks out short trump fits, else they would open 3 card majors, and raise partner
with doubleton support frequently.

Defense to a moysian depends upon the specific hands, yours, dummy, etc. This is true for defense in general. But when you suspect that declarer is on a moysian, a forcing defense may be good. For example, suppose that you have 4 trumps, and the hand with 4 card trump “length” has shortness.
A forcing defense might be useful here to develop your long trump into a winner. Of course a good declarer may still survive this approach to defense. You may even be helping declarer to play the hand as a dummy reversal.

Alternatively, good declarer play with a Moysian will often involve ruffs by the hand with 3 trumps. So lead trumps to cut down those side suit ruffs.

As I said, good defense involves understanding and visualizing how declarer will play the hand, and then countering that scheme. This is true for play in any contract, not just a Moysian fit.