Source wikipedia: Calvin Peete was an american professional golf player. He was born in Detroit in 1943 and he left us in 2015 in Atlanta. 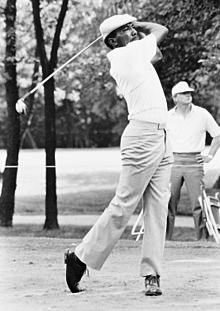 He was the most successful Afro-American to play in the PGA tour, with 12 very net victories all over the second grade, before Tiger Wood’s extraordinary career began.

Mr. Accuracy was his recognized nickname on Tour, in honor of the accuracy of his shots, especially the drive, that in golf is the long start shot, but also for his approaches to the green.

We also have to consider that he was playing with wood and metal golf clubs, profoundly different and more rudimental than those currently ones, in composite and performance materials.

The deal that follows just reminded me Peete, especially for his nickname, because it seems easy and obvious, instead to carry out the contract it is essential to have accuracy and precision in the time of maneuvering that only a high-quality player can have.

would have been better, but now we have to move on.

If bridge had been Calvin Peete’s game, how accurate would he have continued?

Let go back to the bidding: West has open 1

, he certainly owns five clubs cards at least, then he played

Q. East has passed on the opening bid of his partner, he has few points and we’ve already seen a Queen. These are the elements available.

The contract seems easy to carry out: 5 tricks in spades , at least 4 tricks in hearts and the

Be careful, you don’t want to leave one trick on the way.

The first accuracy to be taken care is to play

A immediately, with four hearts in West and the immediate ruff by East, the contract would still be feasible. Everyone follows with hearts, East in particular with

9 and this seems to confirm 4-1 split trump, but even if it were a fake discard, you can still reward yourself. At this point, the second accuracy is to stop beating trumps and play hearts to South. East discarded

K. The last accuracy is to unblock the

East can or can’t ruff, but he’s defenseless. If we had beat all trumps directly, we’d finish to lose control, having already ruffed the

Q and having not yet established the hearts.

If we play two rounds of trumps and then we give hearts to West, he will come back with a ruff and discard and the maintenance of the contract would be impossible: if we ruff in hand we fatally shorten, if we ruff in North we wouldn’t have got back in South unless with a deadly ruff.

2019 Victor Champion Cup Festival of Bridge: Which one’s the youth...

Out of Lead By Fred L. Karpin

7th February 2018
X
We use cookies to ensure that we give you the best experience on our website. If you continue to use this site we will assume that you are happy with it.Ok