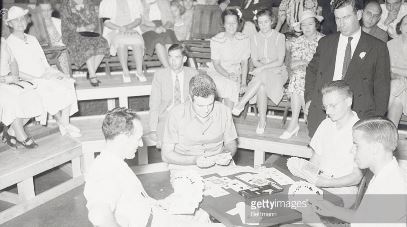 Kibitzers Come Into Their Own at Bridge Championships, Asbury Park, New Jersey: Kibitzers at last have come into their own, for they are not only welcomed at the National Contract Bridge Championships now being held at Asbury Park, but a special gallery has been built for their comfort and convenience. Playing with jumbo cards for the benefit of the kibitzers are, left to right, Charles Goren of Philadelphia; Oswald Jacoby of New York; B. Jay Becker and John Crawford, both of Philadelphia. Referee standing at right is Edward Hymes, Jr., of New York.

End plays always gave the gallery a thrill. Here is one executed by Mrs Helen Sobel of New York, who, for the second consecutive year, won the National women’s pair championship with Mrs. R. C. Young of Philadelphia.

With East and West vulnerable. Mrs. Sobel naturally assumed that West for her bidding her bidding held two five-card suits. With this count on the hand, she was able to execute the play that gave her the contract.

After the opponents had won two rounds of diamonds, Mrs. Sobel (South) ruffed the third diamond, then picked up the trumps. Two high clubs were cashed, and Mrs. Sobel was right in her assumption that West now held only red cards.

At this point she led hearts, forcing West to win. With only hearts and diamonds left, either play allowed Mrs. Sobel to ruff in one hand and discard her losing club from the other.

A Wise Time to Fool your Partner By Charles Goren

1st November 2017
X
We use cookies to ensure that we give you the best experience on our website. If you continue to use this site we will assume that you are happy with it.Ok