For example, when forced to make a discard while declarer is playing the diamond suit:

Revolving discards are very similar to Lavinthal Discards. The difference lies in the “revolving” approach, whereby a high spade encourages clubs and a low club encourages spades. In the above example, a low club when playing Lavinthal would be a signal for hearts, the lower of the two remaining suits (hearts and spades).

Here is a simple example of how they work: 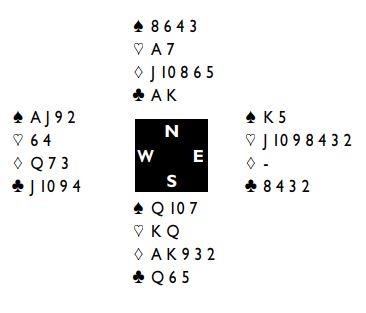 West leads the jack of clubs.

When declarer starts on the diamonds,East discards the jack of hearts,suggesting he has something good in spades.

The same principle works all the way round the suits, so a high spade would ask for a club,a high club for a diamond and so on.

In its original version,the discard of a low card worked in the same way,a low spade asking for a heart etc.

Some partnerships agreed that it only operates on the first discard.

Strengthen Your Game By Brent Manley

Rectifying the Count By Oswald Jacoby