Prior to the introduction of the suit‐preference signal, there was no signal available in lead or play, whereby a card in one suit signified a definite preference for one of the other suits. Where a switch to another suit was obvious, the choice of one of the remaining suits often was a sheer guess. If your guess was wrong, the element of timing was lost. This gave the declarer the opportunity to nullify the trick‐taking ability of the defense. Many persons, well versed in the play of the hand, do not realize how often the opportunity arises to use suit‐preference signals to advance the timing of the defense.

Where a suit‐preference signal is used, both partners on defense should have an adequate understanding of the proper use of all other signals. Knowing how to use the other signals will clearly mark the unmistakable situations where these signals are of no avail. At this point, if both partners understand the use of the suit‐preference signal, they can eliminate the guess as to which of two suits to lead on the first opportunity.

On those rare occasions where ambiguous situations arise, the come‐on signal or discouraging signal take precedence over the suit‐preference signal. A review of the bidding, plus the application of common sense, will in nearly every case furnish the clue to the proper line of action.

By this same token, where the discontinuance of the led suit is self‐evident, the play of the lowest card denotes a preference for the lower ranking of the two plain suits. (Trump and led suit excluded.)

To make this perfectly clear, we will assume that you are defending against a heart contract. Your partner leads the ace of spades. The dummy is faced with three or four hearts and a singleton spade. It is self‐evident that a switch is desirable. In following suit on this trick, you can indicate a preference for the club suit, which is the lower ranking of the two plain suits, by playing your lowest spade. If, in the same situation, you play an unnecessarily high spade, you are indicating a preference for the diamond suit, which is the higher ranking of the two plain suits.

You should not think that a suit‐preference signal is mandatory in this situation. If you have no worthwhile line of play to offer your partner, choose a card from your holding that your partner would recognize as neither your lowest card nor an unnecessarily high card. In some instances, your holding in the suit may be such that your partner might get the wrong inference from the card you play, but with every signal you try to convey the best message you can, even if you have a limited holding. Your partner can only interpret your lowest card or an unnecessarily high card as denoting suit preference. Any other card in this situation tells your partner that the course of action is left to him to decide.

With the identical dummy situation of three or four hearts and a singleton spade at a heart contract, your partner may make a lead which the declarer may overtake with a higher card. The card that you play third‐hand can denote a preference for the higher or lower ranking plain suit. It does not matter if the defense retains or loses the lead; the suit‐preference signal has offered valuable information that can be used at the first opportunity. 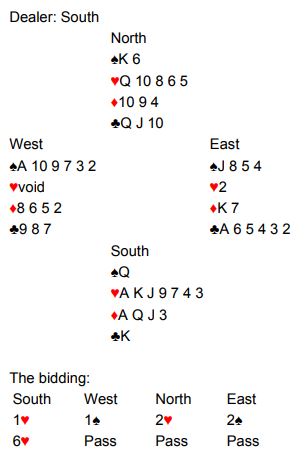 I am going to offer an example where the use of a suit‐preference signal would have defeated a slam contract. I sat South and was the declarer at six hearts. Back in 1931, slam bidding was rather crude, and you will have to admit, if you review the bidding, it would be hard to stay out of a six‐heart contract after your partner has given you a free raise.

West opened the ace of spades and immediately was in a quandary. West thought for a while, made the wrong guess and finally led a diamond, allowing me to make the six‐heart contract by discarding my losing club on the king of spades. In this case, a simple application of the suit‐preference signal would have eliminated the guess by indicating a preference for the lower ranking of the two plain suits, in this case, the club suit. In following suit on the first trick, East could simply denote suit‐preference for clubs by playing the four of spades. 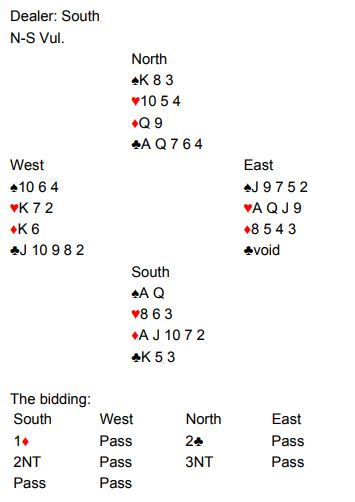 The following example will show the gain in timing by the use of the discard suit‐preference signal at a notrump contract. This hand was reported by Albert H. Morehead in his column in The New York Times in a 1935 issue. The hand was defeated by Mrs. Lavinthal and myself, making use of the first discard to show preference for one of the two remaining suits.

West opened the jack of clubs, which was won in dummy with the queen. On this trick, East discarded the three of diamonds, asking for a shift to the lower ranking of the two remaining suits. South, seeing that clubs could not be run, led the queen of diamonds. On winning with the king, West switched to the heart suit and the contract was defeated.

Here again, you can observe the gain in timing by using suit‐ preference. Being void in clubs, West discarded the three of diamonds on the first trick, asking for a shift to the lower ranking of the two remaining suits. The choice was simple and eliminated the possibility of making the wrong switch. You may say that East could have given a come‐on signal on the first trick by playing the nine of hearts. True, and then the defense would get the king of diamonds and three heart tricks, making a total of four tricks and allowing the opponents to make three notrump.

The same situation arises at suit contracts. You show out on the second lead of trumps and are faced with a choice of discards. If you use the come‐on signal when not following suit, how can you discard from a holding like K‐J‐3 to denote a come‐on in that suit? When I refer to the come‐on signal, I mean its use to denote with one discard on the current trick the indication of your desired lead. In discard situations, the exclusive use of the discard suit‐preference signal can give positive information without altering the potential trick value of the suit indicated by the discard.

With holdings like K‐7, Q‐J‐5, A‐J‐9 and many other combinations you can readily picture, the discard of any one card on the current trick to indicate a come‐on signal would immediately impair the value of your holding. In discard situations where you would normally use a high‐low signal because you do not have a really high card to denote a come‐on, you are making use of a chain signal. If the cards at your disposal are the three and the deuce, the opportunity to discard the deuce after first discarding the three, may come a few tricks later. In the meantime, the three could easily have been misconstrued as a discard from a worthless suit.

Another alternative in discard situations was a discard of a low card in one suit, followed on the first opportunity by another low discard in another suit. This method suggested the possibility of having something worthwhile in the remaining suit. This chain signal also has the inherent weakness of not being completed in time on many different types of hand.   The bidding that precedes the play of the hand often gives valuable clues, whereby the suit‐preference signal can show the only way the contract can be defeated. Take a situation like this.

In the bidding, your partner has revealed the fact that he has a long suit. As an opening lead against an opposing contract, your partner’s lead is a spot card in his bid suit, which you easily recognize as not being a fourth‐best lead. It may be the lead of a deuce or a nine. In situations like this, your partner counts on you to take note of his variation from a normal like of play. He is using suit‐preference to convey to you that a switch to a certain suit may create a ruffing situation or that he has a tenace holding over a suit bid by his right‐hand opponent.

Here is an example in which the use of suit‐preference signals are based upon the logic that arises from the prior bidding. This hand was played in a Memphis team‐of‐four match on December 3, 1941, with Mrs. Olive Peterson and Mrs. Ben Golder in the North and South positions, respectively.

Mrs. Peterson and Mrs. Golder, both life masters, use suit‐ preference in coordination with all other signals to gain extra tricks in tournament play. 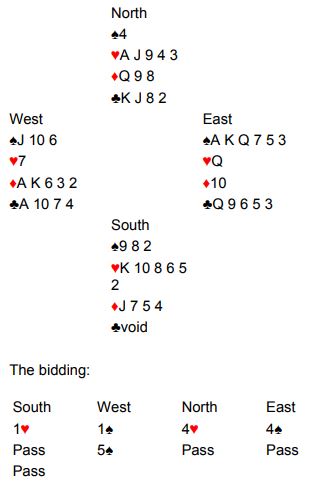 The usual lead would have been the six of hearts, but Mrs. Golder, hoping to get in a ruff in clubs, led the deuce of hearts, showing that she wanted the lowest ranking suit returned. Mrs. Peterson won the trick, returned the deuce of clubs, and Mrs. Golder ruffed. Later, Mrs. Peterson made the king of clubs and defeated the contract one trick ‐ the only way the contract could be defeated. I am quite sure that you will find many hands where suit‐ preference will gain an extra trick. But this extra trick can be gained only where your partner also knows how to use suit‐ preference properly.

About Hy Lavinthal (1894‐1972) invented the suit preference signal that bears his name (1933‐34). A retail store manager and innovative bridge teacher from Trenton NJ, Lavinthal also served as associate editor of The Bridge World. His book, Defense Tricks, explained all the stipulations of his theory of defense.

Jump Rebid in a new Suit by Andrew Robson

26th November 2017
X
We use cookies to ensure that we give you the best experience on our website. If you continue to use this site we will assume that you are happy with it.Ok