Lauritz Streck is a U25-Player from Germany, currently studying mathematics at the Bonn University.

The White House Junior Tournament in Amsterdam. One of the nicest and toughest junior competition there is besides the big championships, organized with a lot of effort and volunteering by the Bridge community in the Netherlands – a big thank you for going through that effort again every year!

Round Robin, the match against Poland. Even though the match is not that important as your pretty much qualified to the A-group and Poland seems to be headed to the B-group (so the carryover from this match probably will be lost), of course you want to give your best. 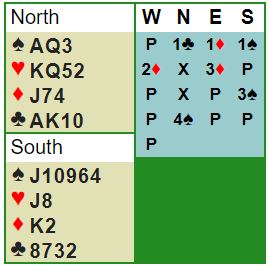 The opponents play UDCA and the play unfolds:

So far so good, it appears we’ve gotten a pretty friendly lead. Right or wrong you now play the spade finesse.

You’re heart skips a beat. You’ve seen similar positions before in Bridge books. A finesse that can’t be repeated due to insufficient length in the short hand. Mollo echoes in your mind: “The smother play. A play so rare that in a long life of Bridge hands it might nor occur once.”

For the moment there doesn’t appear much to do but to knock out the ace of hearts.

K – East wins with the

East has the ace, the position isn’t destroyed by another trump lead. The cards start to get blurry, you have trouble going through the variations of play. Is now the time? Can now be this once-in-a-lifetime opportunity? You play a small club, West follows with the

4. The world starts spinning. What do you play?

At the table I play

Q and exit with a club. If the full hand is as below East will be forced to play a club or a diamond now, capturing Wests king. 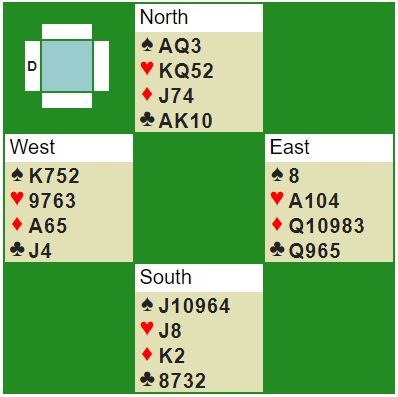 A classic smother play, usually only indigenous to the last pages of Bridge books on technical positions. Beautiful, isn’t it?

Unfortunately this line is remarkably unsuccessful when the full hand turns out to be: 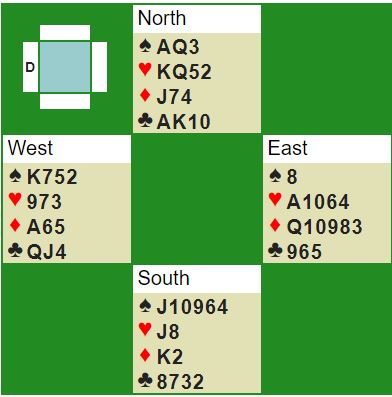 Should I have gotten it right? West signaled an odd number of hearts on the first round. True, it looks like the defense should always get it right even if he signals dishonestly in the relevant layouts. But will that beat the routine? West played

As it is just another game where everyone asks disbelievingly how one can possibly go down with QJx in the slot. Oh well, there is still a long life ahead…

22nd April 2019
X
We use cookies to ensure that we give you the best experience on our website. If you continue to use this site we will assume that you are happy with it.Ok