People who know me, know also that I am a lazy player, which means that I’m almost never declarer. But yesterday I had to play two difficult 3NT contracts, which were interesting enough to talk about. 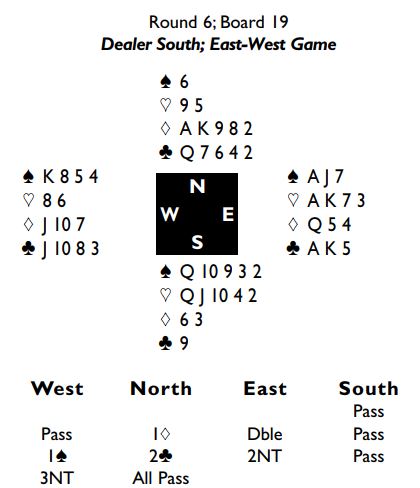 The opening lead was the six of diamonds. I played the jack from dummy, which won the trick. I tried the jack of clubs, small, small, nine. It looked like a singleton, as the opponents were playing inverted count, and the nine might be an important card. However, if North has ten cards in the minors, it is probable that the queen of spades is wrong.

But if I can rectify the count, South can doubtless be squeezed. So I played a diamond and North cashed three tricks in the suit. It wouldn’t help him to not take his tricks as I could then endplay South.

Even so it was also all over. If North plays the last diamond, I can squeeze South, and if not, South will be endplayed. 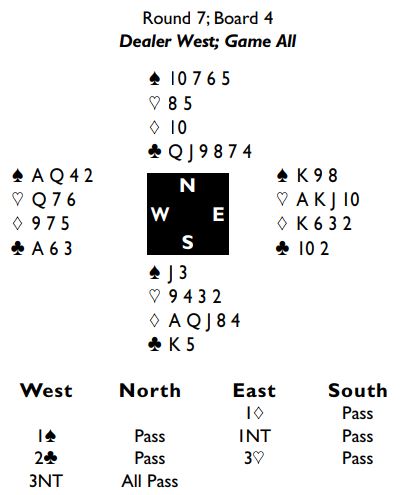 South led a heart and I was a little surprised as it was likely that my opponents had a good idea of my distribution. Why did he not lead a club?

The answer is easy, he had few clubs, but a good hand. If it is true, he should have the ace of diamonds.The odds appear simple,spades might be 3-3, or I have to score a trick with the king of diamonds.

How should I do that?

I have to cut their communications in clubs, then play spades and hope to endplay South. So I took the queen of hearts, and played a small club from dummy, taken by North’s Queen. After some thought North played another heart, so I won, and played another small club, South winning with the king.

He played another heart and I was sure, that my plan was going to work! I cashed my major suit winners, but to my surprise, South was the one who showed out. I seemed to be destroyed, but I played the ace of clubs, and a diamond.

When North played the ten I had no choice but to play low, and South was endplayed having been reduced to the AQJ of diamonds by the one suit squeeze.

The Aces on Bridge by Bobby Wolff

Which forcing raise with a singleton do you choose? By Steve...