A POOR opening lead too often gives the declarer that one extra trick which he requires for his contract. In a fair proportion of ordinary hands he is dependent on faulty defensive plav in the end-game for this extra trick, but in slam hands the damage is usually done at the start. 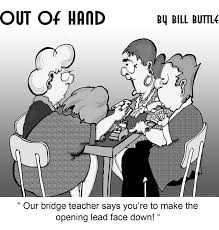 The opening leader finds it too difficult to draw the necessary inferences from the bidding, and, even if he knows all the book leads by heart, these will be of little help in a situation where camouflage is of such vital importance.

In ordinary situations orthodox leads such as the top of touching cards from K Q 10 4, Q J 9 4, or even J 10 8 4, pay best, but in defence against a slam contract it may be best to lead the Queen or Jack or Ten respectively from the above holdings.

Camouflage can do no harm where the partner is unlikely to take a trick. A fourth-best lead from a holding such as K 9 7 2 or Q 9 7 2 or even J 9 7 2 is definitely dangerous, but if the leader has a sure entry card he must take a risk and try to establish another winner elsewhere.

No hard and fast rule can be laid down for so plastic a situation. It is common knowledge that if the six top cards in a suit are gappily divided between the two sides, an extra trick in the suit is sure to be lost by the side which first attacks that suit. The moral, then, is to avoid leading from a gappy suit.

The leader should ask himself

An analysis of some examples – from actual play will best clarify the effects of some opening leads.

North, the dealer, opened with One No-Trump, and South jumped to Six Hearts. West held the Ace of Clubs as an entry card, and Spades K 9 8 2. He led the Two of Spades, hoping to set up a trick in the suit before parting with his Ace. Any other lead would have been better. South’s only chance of making his contract rested upon West having led away from the King, and he let the small Spade run up to his Queen. The bidding had indicated a trump lead as the least harmful.

Here is another example where the lead of a trump would have averted a disaster.

The bidding had proceeded : South, the dealer, opened spade, North showed a maximum raise, and South ended with a Six Spades bid. North support for Spades clearly indicated that the lead of a trump was safest. West however, led the Three of Hearts from J 7 6 3 to dummy’s Two and East’s Ten. Had East played his Ace the necessary twelve tricks would have been in sight. In the end-game which followed, East bared his Ace of Hearts to keep a guard in Clubs (Q J 8), and the declarer, successfully ran his Nine of Hearts to force the Ace. The contract was really safe after the opening lead. It is interesting to note that the side which first attacked Hearts, with a joint holding of A J 10 against K Q 9, lost a trick in the suit, the one trick which the declarer required for his contract.

Here is another example where, the lead away from an unprotected high card made the play too easy for the declarer.

The lead of a trump was indicated on the bidding : North, One Club; South, One Spade ; North, 4NT (Blackwood), implying strong support for Spades ; South, Five Diamonds showing one Ace; North, Six Spades.

K 8 7 6, led the Six of Clubs to dummy’s Nine and East’s Two. East did not cover with the Jack, as this would have set up sufficient tricks for the declarer after conceding a trick in Clubs. The opening lead gave in all to the declarer three discards of losing Diamonds, one on the Nine of Clubs, one on the Ace, and one on the long Club when established. Only a trick in Hearts was lost.

15th September 2017
X
We use cookies to ensure that we give you the best experience on our website. If you continue to use this site we will assume that you are happy with it.Ok