Victor Mollo’s Menagerie series of books remains paramount in the field of bridge humour. As a new generation prepares to sweep away what is left of the old guard it seems appropriate to remind you of some of Mollo’s characters.  Who would not wish to be able to match the genius of the Hideous Hog? Failing that, who would not settle for being as lucky as the Rueful Rabbit, whose guardian angel is always on hand.

The members of the Griffin’s Club were enjoying the latest meeting of the Fine Bottle Club, where a light lunch of Crab & Linguine Risotto, Chateaubriand, Summer Pudding and Monsiuer Merle’s delightful selection of cheeses, was followed by a few gentle rubbers. The Hog had graciously agreed to sit opposite R.R. while Papa partnered Karapet.

The Hog, still savouring the delights of the 1950 Chateau Coutet that accompanied the desert, and the Sandeman’s 1927 that drew out the best of the cheese, enjoyed this deal: 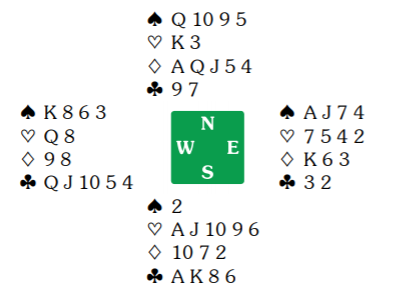 Rather than jump to 3NT, Papa marked time with 2

. When Karapet supported his hearts, the Greek jumped to game.

The Hog led the

Q and Papa won with the ace and played a diamond to the queen, the Hog following with the nine and R.R. the three. When it held he ducked a spade and the Hog won with the six and returned the

8. When Papa played dummy’s four R.R. was about to contribute the six when he discovered that another card, with a small coating from a chocolate almond biscuit that the Rabbit had been enjoying with his coffee, was sticking to it. Upon inspection it proved to be the

K and R.R. won and without knowing why returned his remaining diamond.

H.H. ruffed and exited with a spade. Papa ruffed, cashed the

K and ruffed a club with the

3. R.R overruffed that and exited with a trump ensuring two down. Shortly after Karapet had conceded -2000 in an attempt to prolong the rubber, along came: 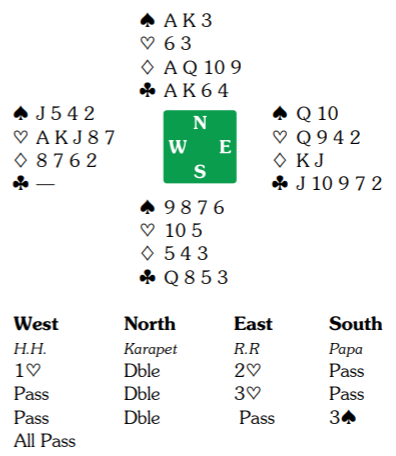 AK, and switched to the

9, and R.R, won with the singleton king and recalling a piece of advice he had read in Better Signalling Now he returned the

2, making it clear that he wanted a diamond back. H.H. ruffed and played the

6. Papa played dummy’s ten and R.R. was on the point of ruffing, when he discovered that the

J was sitting next to the

Q. After collecting the trick the Rabbit returned the

When he recounted the tale at the club’s bar that evening Colin the Corgi suggested that Papa had been unlucky, but H.H. would have none of it; he pointed out that if Papa had won the second diamond with dummy’s queen and played the top trumps then he would have been only one down. The Rabbit’s guardian angel put in an appearance on this deal: 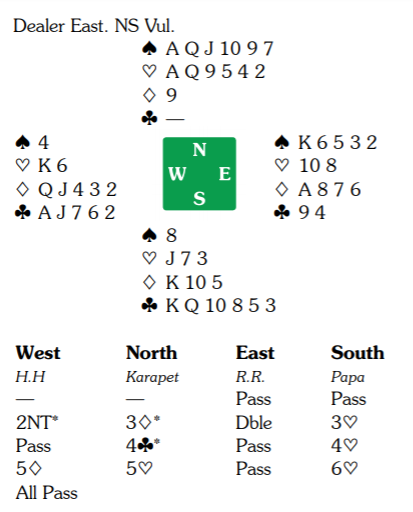 Pausing only to pick up a glass of the Sandeman 1927 that the Walrus had left en prise the Hog explained what had happened: ‘R.R. had persuaded me to use 2NT to show a weak hand with the minors. Karapet’s 3

was for takeout with emphasis on spades and the Rabbit doubled to show diamond support. Karapet’s 4

was a cue bid and when they reached game I decided to try and prolong the rubber by sacrificing. When Karapet went on to 5

Papa, no doubt placing him with a better hand, went for the slam bonus.

Q and R.R. won with the ace and pondered. As you can see, a club lead will keep declarer out of dummy and ensure we get another trick, but the Rabbit decided it would be a good idea to cut down dummy’s ruffs and switch to a trump, which would have been fatal, as it would have collected my

K and allowed declarer to get home via the ruffing spade finesse . However, the

8 that R.R. intended to play was adjacent to the

K and that is the card that settled on the table. Karapet won with the ace and ruffed a spade, but I overruffed and congratulated R.R. on his brilliant defence’.

Published by kind permission of the Mollo Estate.

Thinking outside the box By Phillip Alder

28th December 2017
X
We use cookies to ensure that we give you the best experience on our website. If you continue to use this site we will assume that you are happy with it.Ok