The best advice I can give is: keep it simple and concentrate on the following first steps:

2. Make a plan to establish more

3. Do not start playing until you have done 1 and 2 above.

All too often declarers play to the first trick in a no-trump contract, without having any idea of how many tricks they expect to make. This approach does not lead to successful declarer play! 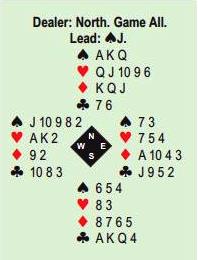 This is a simple example, as there are no finesses to be taken, but the principle should be the same whenever you are playing in no-trumps. Count your top tricks, that is tricks that can be made with no effort: an ace, or a king alongside an ace, etc. Here you have six top tricks: three in spades and three in clubs, but no top tricks in diamonds and hearts — you have to establish them.

You need at least nine tricks so you are aiming for three more. You can make three in hearts and two in diamonds, and one more in the latter suit if it breaks 3-3.

It is better to go for a sure bet rather than a speculative one, so you should play on hearts even though in diamonds you only have to knock out one honour as opposed to two in hearts.

So, win with the queen of spades and play the heart six to your eight and West’s ace; win the spade return with dummy’s king, and run the nine of hearts to West’s king; a third round of spades is won in dummy, and you can cash three winning hearts. You have established your nine tricks in time.

If you play on diamonds first, East might win and lead a spade to dummy’s king; you could then take two diamond tricks, but with the suit splitting 4-2, there would be no third trick to be had and you would have to go back to hearts.

However, now West would win the race: when he wins with the king of hearts he can play a third spade knocking out your last stop while he is still in possession of winning spades as well as the ace of hearts.

The play on this deal is straightforward, but it is an exercise in planning. There are many more steps to planning a contract than the three given above, but these are the most fundamental ones. If you are not using them, then you should step backwards and start with them because, without the proper foundations in place, contracts will often crumble in your hands.