In this article, we’ll take a break from the deceptive, selfish practices of declarer play, and focus on the finer points of cooperative defensive play. The ‘trump uppercut’ is a form of trump promotion, though a more apt name would be the ‘trump onetwo punch,’ since there are two steps to the execution: one defender ruffs high, forcing declarer to ruff with a high trump trick − the right side jab − and in doing so promotes one of partners trumps to a winner − the left side cross.

As West, you hold

After some thought, you decide that the

A is the safest lead, despite partner’s club bid, and down comes the dummy: 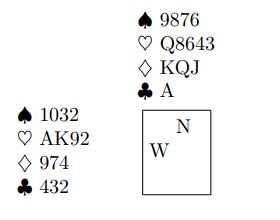 5 to the first trick; partner’s

10 looks like a singleton or doubleton, so there is no reason not to cash another heart, and all follow to the

J). Now what? If partner doesn’t have a minor suit trick coming, it seems there is no hope of setting the contract. Even worse, if partner has a spade honor, it won’t win a trick, since declarer can finesse East in trumps.

We could lead another heart for partner to ruff, but what will that accomplish? Declarer will just overruff whatever East chooses to ruff with. But if partner does have a high spade, he can force declarer to ruff high, which will promote our

10! So we lead another heart, which partner ruffs with the

K, taken by declarer with the trump ace. Declarer can cash two top spades, but has to lose a trump to us and a diamond to partner’s

A in the end, for down one. Here was the full deal: 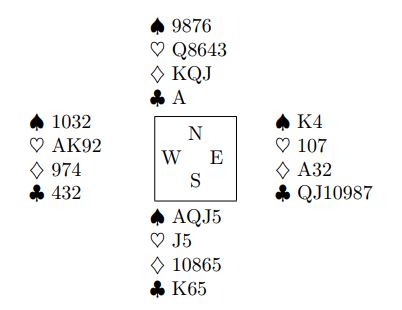 Lets take a moment and look at the situation from East’s point of view. After dutifully signalling high low in hearts, partner led us another heart, which (it seems) he expects us to ruff. Since partner holds the

AK, declarer must have all the other missing points, so East can be reasonably sure his

K is dead in the water. Hoping for an uppercut seems like the best play. Even if, by some fluke, partner has the

Q, the contract will be set no matter what, so it cannot lose to ruff with the

K. Note also that declarer’s discard of the

J to the second trick makes it likely that he started with two hearts; and even if he has a third heart, it won’t matter which trump we ruff with.

44th World Teams Championships: The Icing on the Cake by Brian...