U26: Michael Botur and Jakub Vojtík claimed the title of junior champions. Silver medals went to Latvia thanks to Janis Ilzinš and Martin Maasik. Estonians Raigo Luhaorg and Jasper Vahk finished third – Jasper being only eleven years old at the time!

U16: The U16 pairs champions for 2019 are Aleks Bukat and Sebastian Zimorski from Poland. Silver medals went to Poland too, namely Łukasz Kasperczyk and Michał Stasik. Ivo Walach and Filip Frobok from Havířov made it to the third place.

Both the pairs and the teams competitions were held as an official youth championships of Czechia, Austria and Hungary, open to all junior players from the world.

It was a perfect opportunity to present juniors from other countries to the Czech young bridge players so they could compare to them and also share their skills all together.

The championships took place from 29th of November to 1st of December, 2019, in Prague Bridge Club as a replacement for the original and traditional National Czech Youth Team Championship, which was being held in Hluk, South Moravia, for many years. 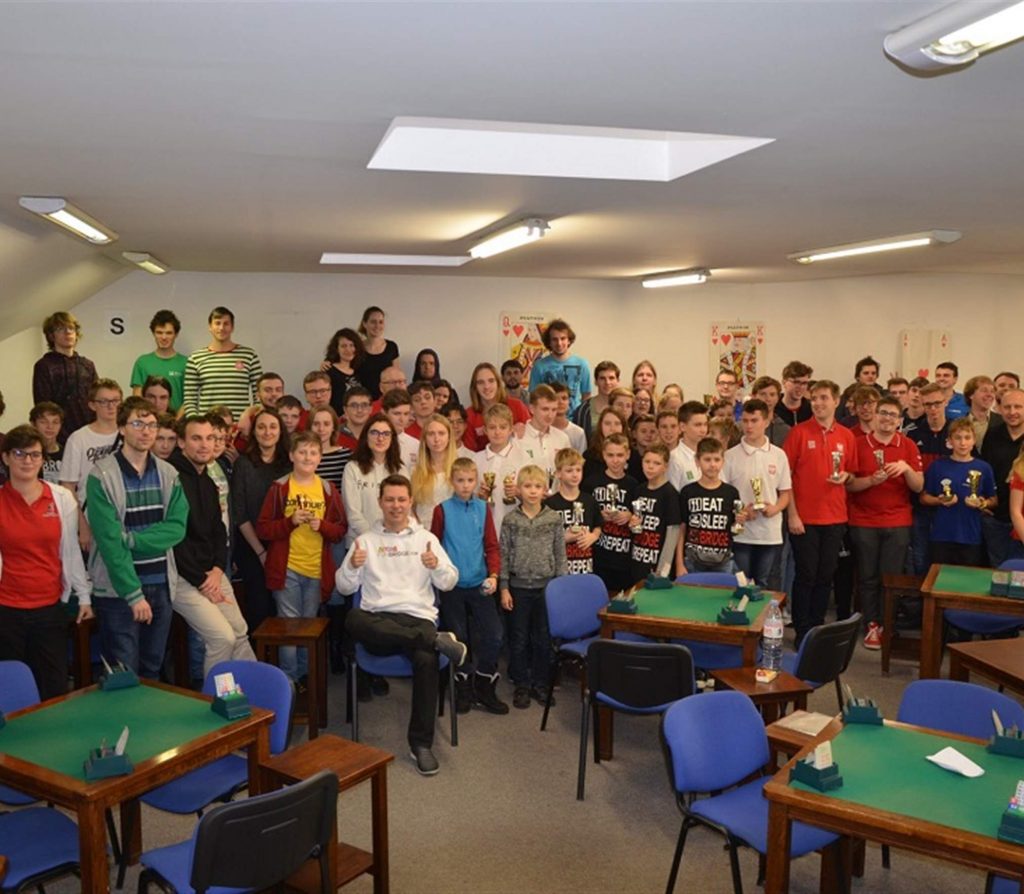 Eighteen U16 pairs and nineteen U26 pairs, consisted of players from Poland, Slovakia, Austria, Croatia, Estonia, Latvia, Hungary and Czechia, battled for the pairs champions titles, while twenty-one teams had the courage to participate in the Central European Youth Teams Championship.

On Friday, November 29th, the pairs championship was held. There was a total participation of 37 pairs and players were divided into two separated groups according to their age categories, all of them playing the same sets of boards. The U16 lot played 9×3 boards in the first round and 8×3 boards in the second round, making every pair playing against all other participants. A similar system was implemented in the U26 category.

On Saturday, the Swiss teams qualification started. The top four sides then played against each other in the Final A on Sunday, while the rest of the field continued in the Swiss Final B.

The first round was edged by Aleks Bukat – Sebastian Zimorski with more than 70%, followed by another Poles Łukasz Kasperczyk – Michał Stasik and Ivo Walach – Filip Chrobok from Czechia. Later in the afternoon, the second round of the pairs championship was on the agenda. Aleks Bukat – Sebastian Zimorski continued their fantastic run, this time with the score of 68.28%, chased by Łukasz Kasperczyk – Michał Stasik and Maciej Betliński – Pawel Światkowski. Overall, there was no doubt about the 1st and the 2nd place. There was a huge drama when it came to the bronze medals though – an extremely tiny margin of 0.01% decided. 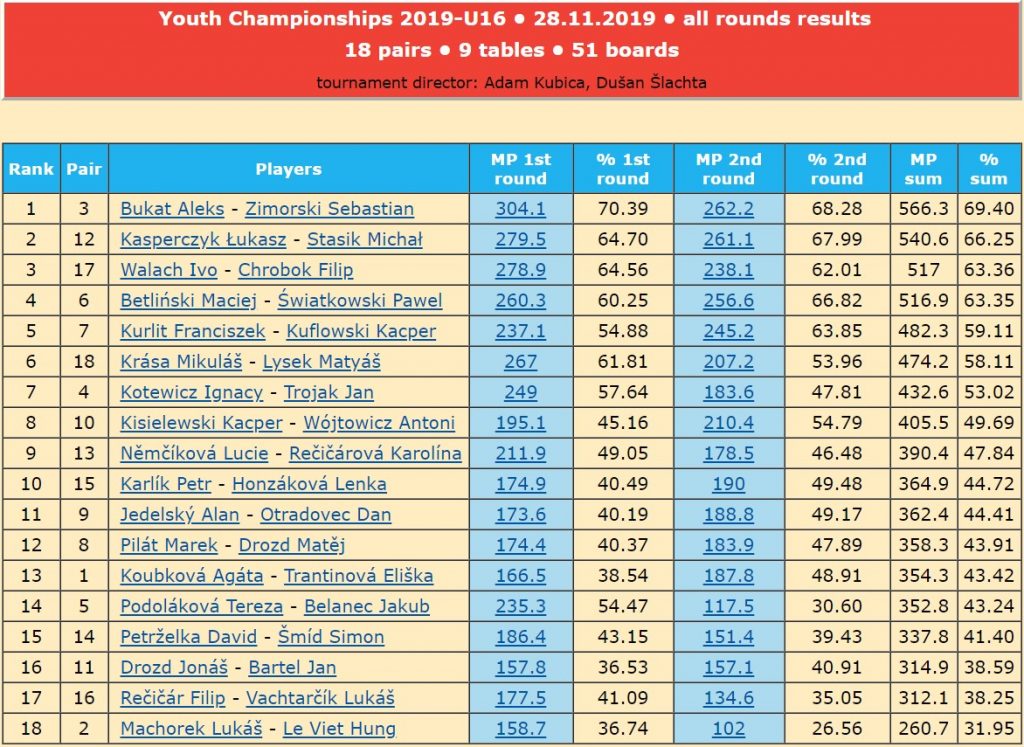 In the U26 category, it was also kind of close – after the first round, the leaders were Michael Botur – Jakub Vojtík from Czechia with 61.98%. They were followed by two Polish pairs: Błazej Krawczyk – Marcin Szymański with 59.49% and Ewa Dziubińska – Maja Mrozek with 59.11%. Jakub and Michael continued with good results as they also won the second round with 62.29%. Other pairs in TOP 3 were Janis Ilzinš – Martin Maasik from Latvia with 60.88% and Brigitta Fischer – Villö Szücs from Hungary with 56.46%. After the end of the day, it was clear that Botur – Vojtík were the new U26 champions of Central Europe! 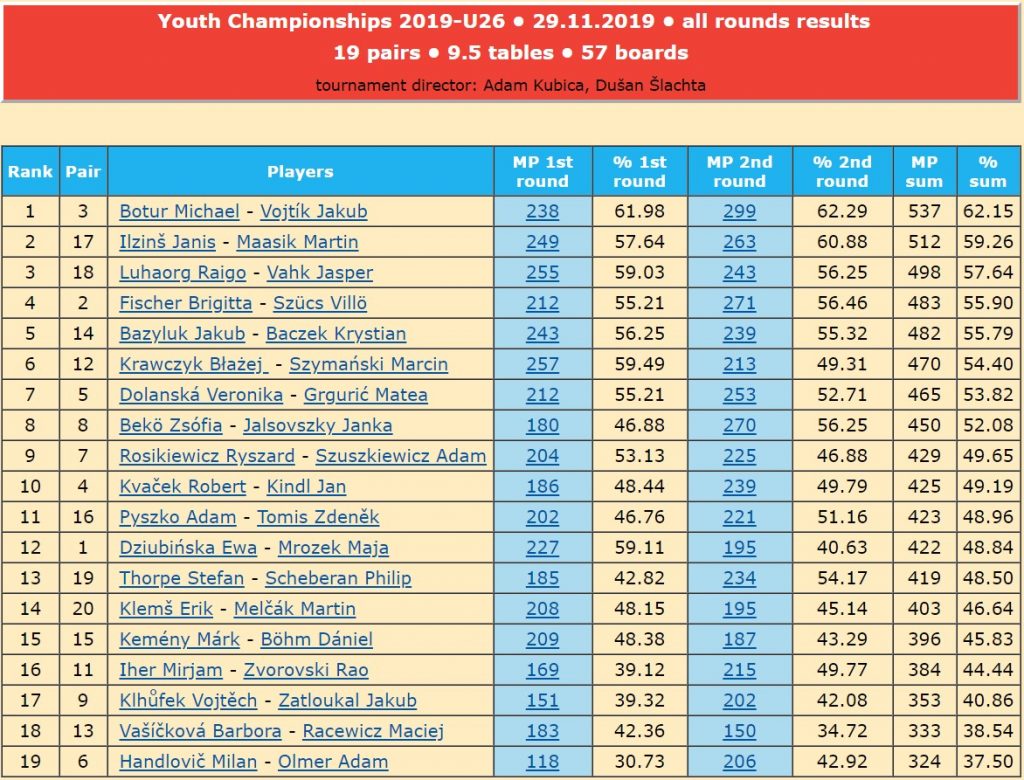 The playing format was particularly specific for U16 players, because they had to play against youngsters and juniors as well as against other U16 teams. Their final scores depended greatly on results from matches against the more experienced teams, in which they aimed to minimize potential huge losses. In the first round, kids did a marvelous job when they were classified between 6th and 16th place out of 21.

Starting from the 2nd round, U21 and U26 teams used their experience to accomplish better results, sending the U16 teams to the lower half of the table. Although there was one shining star – Polish team CKiS Skawina U16. In the 4th round, they scored a lot of victory points against younger Polish kids, making them climb onto the fifth place. That meant they had to tackle some unquestionably tough opponents in 6th and 7th round and the results were -1 IMP against Czechia U26 and -2 IMP against SVK-LAT U26. Together with KBS Miłkovice U16, they finished in the TOP 10 after the end of the first playing day, leaving the rest of the U16 teams in the lower half of the table.

No U16 team made it to the Final A, which meant they would all continue in the Swiss Final B on Sunday. Skawina started pretty well, Polish players beat Estonia U26 with 13.12 VP. They also won the two other matches, but it was not enough to beat Estonia U26 in terms of total VP’s to win the Final B. Still, Skawina put on a tremendous performance and they scored a lot of VP’s against much more experienced players who ultimately qualified to the Final A.

It was a minor surprise when we could see U26W and U21 teams leading after the first round. For example, the Czech-Croatian women team was in TOP 3 for the first half of the round robin. They lost their position after a match against Czechia U26. However, at the end of the day, another women team made it to the Final A after a dramatic finish: Hungary U26W. The best U21 team after the first day was Czechia U21, classified in the 8th place with 77.76 VP.

And these are all teams which qualified for the Sunday Final A: SVK-LAT U26 (leading almost the whole Saturday), Czechia U26, Poland U26 and Hungary U26W.

On Sunday, the finals were played. In the Final A, all the teams played against each other. SVK-LAT U26 had the best starting position thanks to their victory in the qualification. The Czechs and Poles didn’t loose much, Hungary was already 7 VP back.

In the first match, Czechia U26 beat Poland U26 and Hungary beat SVK-LAT. After the second Czech victory, this time against Hungary, Czech juniors were almost 6 VP ahead. And that was enough – because they won also their last match against SVK-LAT leaders so they became clear winners of the Final A. Poland helped itself when the players beat Hungary high with almost 16 VP which assured them silver medals. Qualification winners took bronze medals.

21st February 2019
X
We use cookies to ensure that we give you the best experience on our website. If you continue to use this site we will assume that you are happy with it.Ok