The celebrated partnership of Marty Bergen and Larry Cohen saw its heyday in the mid- to late Eighties. The light, aggressive bidding style they employed made them hugely successful. The duo went their separate ways after almost a decade together, however, with Bergen moving to full-time bridge teaching and writing, and Cohen forming new partnerships. Bergen became a prolific author, trading on his skill as a bidding theorist. Cohen gradually scaled back his playing schedule and began taking up the pen himself in addition to teaching students about the game. Cohen announced his retirement from the tournament scene a few years ago. 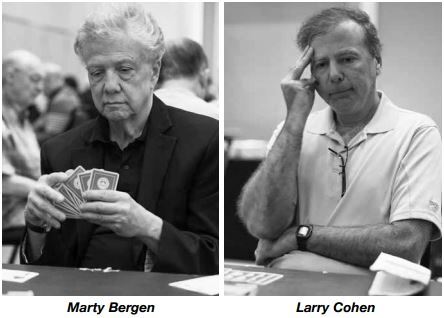 Bergen decided earlier this year to return to playing full time, however, and he persuaded his old partner Cohen to join him here in Orlando to play in a few national-level events. The duo entered the Mitchell Open Board-a-Match Teams on Sunday as part of the squad captained by ACBL Board member Jay Whipple.

Cohen reluctantly agreed to the proposition and laid out some conditions for playing. Knowing Bergen’s penchant for conventional gadgetry and highly specialized agreements, Cohen asked that they use fairly simple methods for their reunion. Bergen sent Cohen a 40-page system outline which Cohen sent back, demanding that it be reduced to 20 pages. Bergen responded by simply decreasing the type-size of the original content and returning it to Cohen.

“And it was still 22 pages!” complained Cohen.

Their at-the-table banter on Sunday evoked a playful wistfulness about their former bidding style, which now – because their approach was adopted by experienced players everywhere – has become mainstream.

This deal came from early in the first qualifying session:

The West player opened his pretty collection with 1

, and Cohen reached for the Stop card before bidding 2

. East made a negative double, and now it was Bergen’s turn to reach for the Stop card, a prelude to bidding 4

The opponents brushed aside this barrage to reach the diamond slam, but Bergen and Cohen were clearly comfortable together after just a few deals. Many of the East-West players who came to Bergen and Cohen’s table were clearly charmed to be playing against the duo, a few even joining in the bidding commentary. When Bergen, as dealer, withdrew the Stop card from the bidding box, an opponent remarked, “Bergen is at the table!” Bergen, holding:

. His hand eventually became the dummy in a heart contract, but he proudly displayed the diamond suit first, as if to silence his critics that he often preempted on junk.

The first session found the team below average (they scored 11.5), but the second session was above average (14.5), so the squad – captain Whipple, Bergen, Cohen, Gary Cohler and Billy Cohen, finished with a dead average score of 26. This total put them on the bubble for qualifying for today’s final. As part of an eight-way tie for the bottom qualifying position, the formula that determines who’s in and who’s not was not kind: They missed the cut. Bergen and Cohen will have another shot at a title later this week, as they plan to enter the North American Swiss Teams.

Two Signals to Help Your Defense