The Bath Coup is a very common manoeuvre. It is a ducking play which enables declarer to keep control of a key suit. The coup dates back to the days of whist and is named after the city of Bath, a hotbed of whist back in the days when everyone in society played the game. 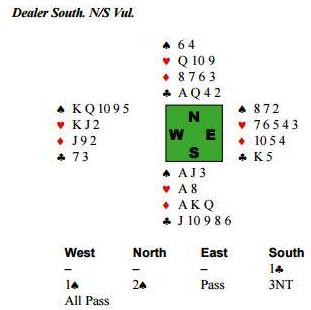 West leads the king of spades. If declarer wins immediately, she will be defeated. Having won the spade she will take the club finesse. East will win the king of clubs and push a spade through the remaining jack doubleton and West will take four spade winners for one down.

See the difference if declarer allows the king of spades to hold the first trick. What is West to do? If she plays a second spade into the ace-jack, declarer gets a second spade winner and still has a secure stopper. If she switches, declarer has control of the other suits. She can concede the club trick quite safely in either case.

Ducking with AJx in this position is the Bath Coup. Although the above is what people normally mean when they refer to a Bath Coup, it would also be possible to duck with ace to three in dummy and jack to three in hand, leaving what is known in the trade as a split tenace.

In the example above, it was easy to see the danger because West had overcalled 1

, but the ducking play would still have been correct even had the opposition not been involved in the auction. It might not prove to be necessary, but the coup cannot do any harm and will still be essential if spades are five-three again – so why take the risk?