Nobody is vulnerable and RHO deals and opens 3

. What do you do with this?

You have a hand on which you would happily open 3

non-vulnerable but you should not overcall 3

because they opened with a weak bid. Say you bid 3

and LHO raises to 4

, which partner doubles (cards, not strict penalties) —what now? Have a look at the full deal: 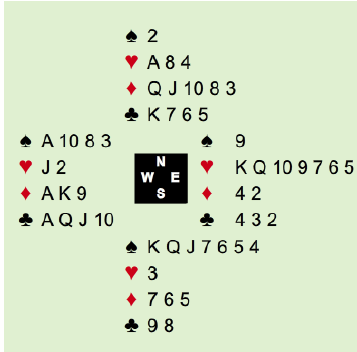 at this point, you will be doubled and lose six tricks (two diamonds and a ruff, two spades and one club) costing 500. If you pass, you will concede 4

+1 for minus 690. Yet partner surely was entitled to double because you overcalled at the three level and he had 10 points with a singleton in your suit. The point is that, when the opponents make a weak bid, then your side should bid constructively hoping to reach game (or sometimes a slam).

Do not make the mistake of bidding on a weak hand over their weak bid. (I remember learning: ‘don’t pre-empt over a pre-empt’ ?) Another example:

(weak) at game all. Do not make the mistake of overcalling 3

. If you do, this could be the layout. 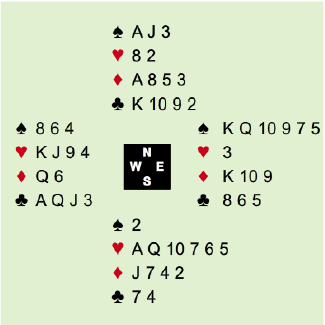 Partner will try 3NT and with some confidence! West will double and you will go for 500 on a soft defence and possibly 800 or 1100, yet partner could hardly pass 3

. Remember it is important when bidding over a weak bid that partner can trust that you will not be weak too. The opposite is true when bidding over a strong bid. You do not want to bid on a good hand and tell them where the cards are or concede a penalty when you had enough to beat them. Now your aim is not to get to game but to obstruct the opponents’ bidding or, occasionally, to find a good sacrifice.

(game force or 23-24 balanced). Your side is at favourable vulnerability. Do not be afraid to get in their way. Try overcalling 3

( ‘weak over strong’). Maybe the full deal is something like: 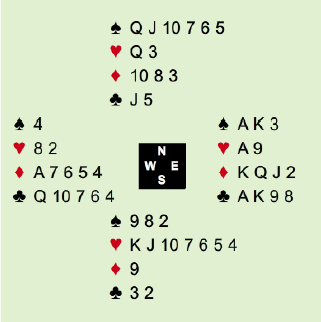 Opponents are cold for 7

, or 7NT. Good luck to them in finding it; they will struggle even to reach the small slam after your 3

bid. If you pass, West can respond 2

and over East’s 2NT rebid can bid 3

showing a slam try with both minors (a 3

transfer would show spades); now they are well on their way.

16th August 2017
X
We use cookies to ensure that we give you the best experience on our website. If you continue to use this site we will assume that you are happy with it.Ok