While working on the new edition of the Official Encyclopedia of Bridge, it occurred to me that we had omitted to mention some of the most important developments of recent years. This article, written in his inimitable style by England’s David Burn, reveals all. It appeared in the March 2010 issue of Bridge Magazine, having originally appeared under the title: Larry Who? – Mark Horton, editor, Bridge Magazine. With apologies to Burn, the spellings have been “Americanized.” — Brent Manley

It appears that the most significant bridge book to emerge in recent years is something called To Bid or Not to Bid: The Law of Total Tricks. This work is said to have revolutionized competitive bidding among experts and average players alike, and it even has a sequel called Following the Law.

The principle on which the Law is based was originally developed by Jules Verne in his novel Nord contre Sud, or “North Doubles South.” It should be apparent from the title that the novel is a bridge fantasy, not meant to be taken seriously, but this has not prevented scholars from following its precepts religiously. In particular, the pithily expressed notion that “the sum of the number of tricks available to North-South in their best trump fit and the number of tricks available to East-West in theirs equals the sum of the number of trumps held by North-South in their best fit and the number of trumps held by East-West in theirs” has caused innumerable learned writers, including the present author, to forget what they were going to say at the end of a sentence because the beginning of it has gone on for so long.

The Law itself is more or less worthless, since the total number of tricks taken by anyone almost never equals the total number available to them, regardless of how many trumps they might have. That is why, in his second book, Larry Cohen was at pains to develop the theme of “adjustments.” The current version of the Law of Total Tricks, assuming that I have fully understood the great man’s words, is:

“The total number of tricks that North-South and East-West can take in their respective best trump fits is equal to the total number of trumps they hold, minus one for the number of holdings such as Q-x and J-x-x in any of the hands, plus one for each card over eight in a side suit held by the partnership, minus a half for every honor held in a short suit, plus a half for having most of your honors in your long suits, with a tendency towards a negative assessment if the opponents bid one of your long suits, but a tendency towards a positive assessment if your hand does not contain impurities.”

No wonder it doesn’t work. And even if it did, no one would have a hope of understanding it. What I am going to present in this article is a far simpler rule, with the following absolute guarantee:

If you never again violate Burn’s Law of Total Trumps, your results will improve enormously.

That may sound a grandiose and wholly unjustifiable claim, but it is not. I have conducted the most comprehensive and painstaking research in order to verify my theory. At the Olympiad in Rhodes (1996), any one of forty teams would have won but for the fact that at some point they violated Burn’s Law. Chinese Taipei, for example, would have been in the final instead of France had they not done this: 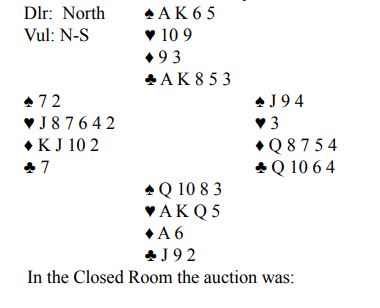 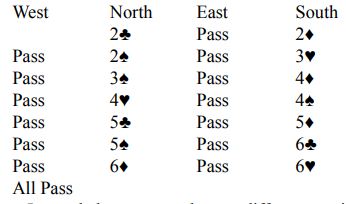 It may help to set out the two different versions of this somewhat bewildering auction: 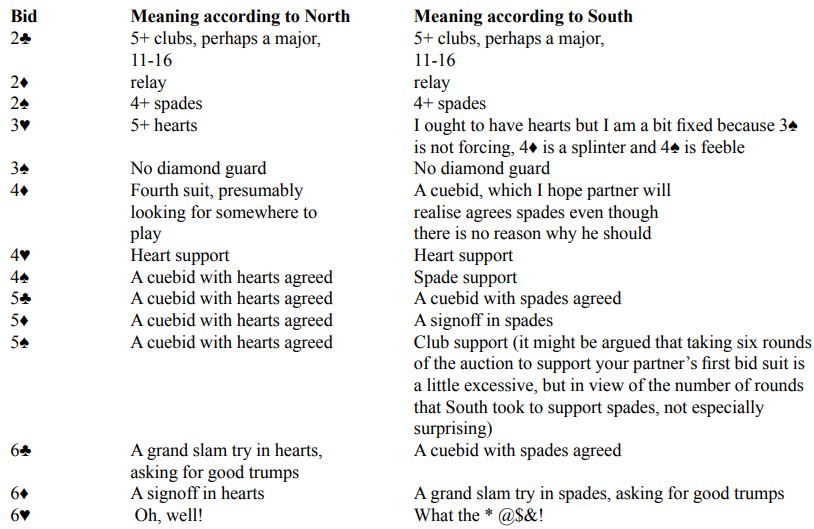 In the Open Room, the bidding was no less risible but rather more effective:

1NT Out of turn, but nobody noticed.

6♠ A punt, hoping that the slam would either be a good one or would make on a blind opening lead.

6♠ made, 6♥ went five down, and France took the lead in the match for the first time in the final set of 16 boards.

Shattered by this blow, the Chinese Taipei men could not recover, and all because they had failed to obey Burn’s Law of Total Trumps:

Britain would have been in the knockout stages but for this:

In the Open Room, Slovenia did well to stop in a making contract, for South had ♠ K Q J 3.

In the Closed Room, one of the more serious violations of the Law occurred:

This contract went five down (it is an interesting corollary to Burn’s Law that almost all violations of it end up going five down) and Slovenia gained 12 IMPs.

In true Larry Cohen style, I have already written the sequel to the Law of Total Trumps.
It is called The Rule of Eight, and it is for those of you whose bidding methods are already geared to the avoidance of 3-0 fits, but whose judgment at the higher levels of the auction may be a little suspect.

This deal from the Olympiad final between France and Indonesia is a good example: 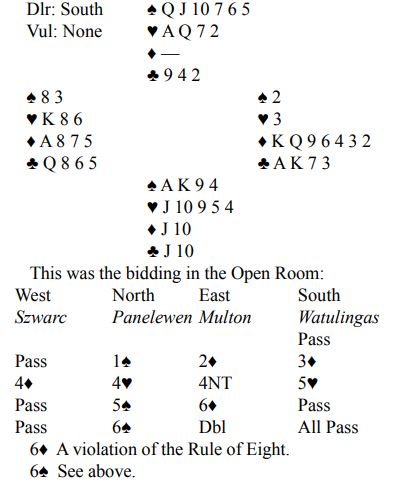 In the Closed Room: 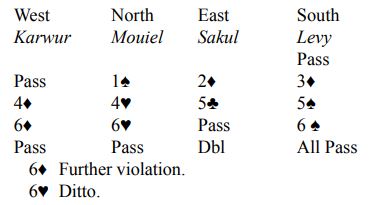 I make the same guarantee for the Rule of Eight as I made for the Law of Total Trumps. If
you never again violate it, your results will improve immeasurably.

The rule is similar to the well-known Rule of Eleven, and is applied in three stages:

1. During the auction, ascertain how many aces are held by your opponents.
2. Subtract this number from eight.
3. Do not bid at the level given by the answer.

The third book in the series will cover advanced topics in card play such as putting down the dummy.

To whet your appetite, here is an important principle:

If your side has bid and supported a major suit during the auction, but finished up in no trumps, you should put the major you were bidding on the extreme right of dummy as it appears from declarer’s point of view. Otherwise, as one poor soul discovered in Rhodes,
your partner may fall foul of Burn’s Third Law: You cannot make 3NT on a cross-ruff.

Taking Care of the Times by Tim Bourke (AUS)