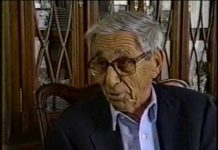 Meet George Rapee the Inventor of the Stayman Convention

During the 42th World Bridge Championships the WBF will be posting on video, a series of declarer play problems mainly aimed for advanced players, this is the sixth one in the series discussed by Yiting Li member of the China Ladies Team.

A Bridge Lesson by Barry Rigal

6th November 2017
X
We use cookies to ensure that we give you the best experience on our website. If you continue to use this site we will assume that you are happy with it.Ok