The tools used to investigate the possibilities of bidding a slam are relatively straightforward. Conventions such as ‘Blackwood’ or its offspring such as ‘Roman Blackwood’ and ‘Roman Key-Card Blackwood’ allow a partnership to explore the possibility of bidding a slam, but often unfortunately lead a partnership to bid too high before they have learnt that a slam is not a viable proposition. Cue-bidding controls is the answer to this problem but is an entirely different kettle of fish, being both difficult to master and open to misinterpretation by an unwary partner. Nevertheless, it is enormously valuable to take the time and effort required to learn cue-bidding, since it is well-nigh impossible to accurately bid the bulk of slams without this understanding.

1). The first cue-bid cannot take place until the trump suit has been agreed, either actually as in the sequence 1

… or implied as in the sequence 1

!… where, by partnership agreement, a jump shift agrees the first-bid suit as trumps.

3). Only first-round control can be shown by the first cue-bid (i.e. a bid in a suit other than the agreed trump suit shows either an Ace or a void).

… cue-bids first-round control in spades, but says nothing about either clubs or diamonds. On the other hand, the sequence 1

5). Cue-bids, whether showing first or second-round controls, are always made at the lowest available level, except when the next level of the trump suit has been bypassed (see Rule 7). After the sequence 1

-P; holding both the Ace of spades and the Ace of clubs you would bid 3

, which would deny firstround control of the spade suit.

6). Second-round control (a King or a singleton) can only be shown after all the first-round controls in the hand have been bid or, by implication, denied.

7). If a cue-bid is made that by-passes both the trump suit and one or more of the outside suits then all the missing controls are being promised. The sequence 1

… not only shows second-round control in the spade suit, but also guarantees first-round control of diamonds. Sometimes it is possible to apply a more sophisticated version of this, which can save valuable space. The sequence 1

… not only cuebids second-round control in spades but strongly indicates that the club suit is not a problem. Either the 4

bidder holds the Ace of clubs or he has no more than one loser in clubs and therefore wishes to continue exploring the possibilities of bidding the slam. This is because the responder’s 4

Here are some examples where cue-bidding is used to good effect.

) An opening hand with at least four hearts.

) A cue-bid showing first-round control in spades and guaranteeing either the Ace or King of hearts.

) First-round control in clubs and guaranteeing either the Ace or King of hearts.

) South has shown virtually all the high-card points he could possibly hold, as well as indicating that he has a shortage in at least one of the cue-bid suits (otherwise he would be too strong to make the limit raise of 3

). North therefore knows that the partnership have enough to bid the 6

slam, but not enough to bid the grand slam.

This auction is highly artificial, of course, since it is extremely unlikely that the partnership would be able to cue-bid all the relevant controls without a single gap in the auction developing at some stage. 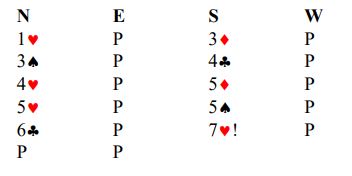 ) An opening hand with at least four hearts.
(3

) A ‘fit-jump’, agreeing hearts and promising at least 3 HCP in the trump suit with four-card or better support, with a minimum of 16 HCP overall.
(3

) Accepting the invitation to cue-bid, showing first-round control in spades and promising either the Ace or King of hearts.
(4

) Cue-bidding first-round control in clubs and promising either the Ace or King of hearts.
(4

) Another waiting bid, asking partner to pass if he cannot bid the next available control (i.e. spades).
(5

) Enough to bid the grand-slam in hearts, but not a hand suitable for conversion to 7NT.

fit-jump) control of the cuebidding sequence rests with the other. North’s 4

rebids should not be taken as automatically closing the auction but as asking bids, denying the next necessary control and asking partner to proceed only if he has it. North’s 3

bid accepts the invitation to try for slam and the cue-bidding sequence should not be halted by South until he has shown all the relevant controls. North’s 4

bids, while cautionary, do not limit his hand – they merely deny the next (necessary) control. Note also that South made an error in this sequence. Over 4

he should have responded with 4

, since this would have promised, by inference, first-round control in diamonds (see Rule 7). He explained afterwards that he was not certain that his partner would have understood his 4

bid (he would have done!) so therefore he bid his controls strictly in order. 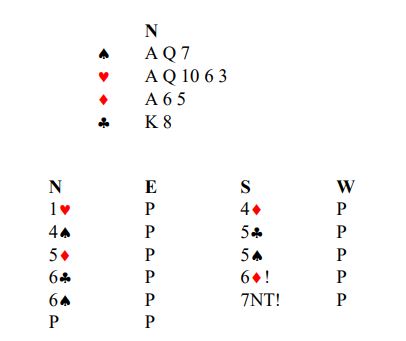 ) An opening hand with at least four hearts.
(4

) A ‘splinter’, showing 12-15 HCP with good four-card or longer heart support and a void or singleton in the splinter suit (diamonds).
(4

) Inviting to slam and cue-bidding first-round control in spades, with either the Ace or King of hearts.
(5

) Cue-bidding first-round control in clubs and promising one of the top two trumps.
(5

splinter, he must be asking North to show the next control (the Queen of spades) if he can.
(6

The key bid on this auction was partner’s 6

. Since he had already promised a singleton, at most, in the suit, I couldn’t understand why he should be cue-bidding the suit again. The only possibilities I could think of was that he needed to know about either the Queen of hearts or the Queen of spades. Since I had both, I decided to trust that he did have a reason for the 6

bid and simply cue-bid my next control. When I asked him afterwards why he had made the 6

bid, he confessed that he was having trouble deciding whether my 4

. He found a very good way of manipulating the auction, since he knew that if he bid 6

, I was going to wonder what on earth he was doing and would therefore bid the next control if I had it. If I had responded with 6

, he was simply going to bid 7

and hope that that was the right place to play. In a situation like this, where it is not clear what partner is asking, bid the control (i.e. 6

) and leave the decision up to partner as to where you should play. If partner had been showing the singleton King of diamonds, then 6NT was certainly cold and 7NT had to be a strong possibility with your Queen of spades. Here is partner’s hand:

As soon as the King of clubs was cue-bid, the only question was whether 7

or 7NT was the best contract. If partner held the Queen of hearts and the Queen of spades then either contract was assured, assuming that the 4

cue-bid showed the Ace! This ability to temporise during the course of a cue-bidding sequence takes some practice, but so long as you and your partner have agreed to keep the sequence going while one or both of you still have critical controls to show, it should not be too difficult to understand that temporising bids such as the 6

in the sequence above are simply asking whether you have the next control. If you do have it, keep the auction open and trust that partner has a reason for his question. Above all, don’t take a unilateral decision about what the final contract should be until you are sure that you have all the information you require (or have given partner all the information he requires). 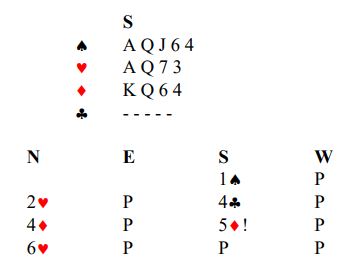 This auction is a good example of the type of cue-bid designed to show all the intermediate controls up to and including the bid suit. It is also a good example of why it is an error to make unilateral decisions about the final contract, rather than giving your partner the information he needs to make the correct decision.

) An opening hand with at least four spades.
(2

) A splinter, agreeing hearts as trumps, showing 18 + HCP and a singleton or void in clubs.
(4

) Cue-bidding first-round control of diamonds and promising the King of hearts.
(5

) Cue-bidding all the intermediate controls available between the 4

bid (i.e. first-round control in spades and clubs and second-round control in diamonds) as well as the Ace of hearts. With a singleton club rather than a void, you would have simply cue-bid 4

, waiting to see if partner could cue-bid the Ace of clubs. With a void club but without the King of diamonds, you would have cue-bid 5

) A poor bid, as an illustration of North’s hand demonstrates…

The correct bid over 5

, denying the ability to cue-bid the next control (second-round control in spades) and asking partner if he has anything more to say. Partner does! Over 5

and now North’s hand becomes just that bit better, since he knows that his losing spade can be discarded on the Queen of diamonds. Note that cuebids of third-round controls should be of Queens rather than showing a doubleton. If you have reached the point of cue-bidding third-round controls there is little point in showing doubletons, since this information would be unlikely to help your partner pick the best spot to play. Provided trumps can be drawn in two rounds and the spades break no worse than 4-2 (with the King not appearing in the first two rounds) then a 7

contract cannot be defeated on any lead. The problem with these types of hands is not making all thirteen tricks, but contracting to make them!

Take All Your Chances, No.6 By Eddie Kantar

A Ruffing Squeeze by Freddie North