When the opponents have done something good, don’t give up:

look for a way out.

Near the end of a Swiss qualification during an international tournament, you find yourself on lead against slam holding the following hand:

Sitting West, you see your opponents conduct the following auction:

What would you lead against the slam?

Heeding Garozzo’s advice “games may be quietly defended but slams must be attacked”, you select the two of spades. 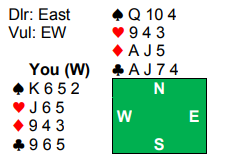 The first trick proceeds: two of spades, four, seven, ace. Declarer takes the king of diamonds, the queen (overtaken with the ace) and the jack, throwing a small club. Next comes a trump from the dummy. Partner plays the king and declarer wins the ace. Declarer continues with the queen of hearts and a low heart to your jack, partner throwing the

Do you return a spade or a club?

The first step is to reconstruct declarer’s shape. Six hearts and two diamonds are known, and both the auction and the play to the first trick mark declarer with a singleton spade and four clubs. Declarer is down to three trumps and three clubs.

An important skill in defence is to focus on the layout that matters. If declarer has the

K-Q, they would have claimed, while if declarer is missing the

K there is no way for them to avoid a club loser. Partner must have the

Q and declarer the

It looks like declarer has successfully endplayed you. Do you open up the clubs or concede a spade trick?

The one play we can completely rule out is the king of spades, a ‘give up’ play. Declarer will ruff and later throw a club. A club is a possibility, but this will immediately concede the contract when partner has

The defence that has the most appeal is a low spade. If declarer puts up the queen of spades he will prevail, but is there any reason for him to do this? Most likely, declarer will play a reflexive ten of spades from the dummy and all of the defensive chances will be alive. 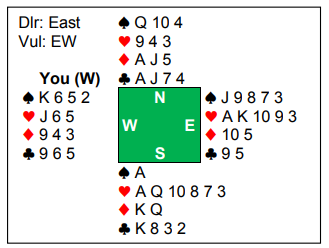 When you get off play with a low spade, declarer mis-guesses by playing the ten. After ruffing partner’s

J, declarer plays their penultimate trump on which you discard a spade, dummy a club and partner a spade. Declarer ends up taking the club finesse and you write down +100.

All declarer had to do was play their last trump and you would have been exposed to a “show-up squeeze”, forced to come down to two clubs in order to hold the

K. After discarding the

Q from the dummy, declarer would have a good chance to drop the