Idle cards are those that can neither make tricks nor prevent the enemy from making tricks, nor act as guards to important cards. They appear to have no practical use at all.

And yet idle cards can exert an influence, Jean Besse though it may be hard to pin down. They are like the neutrinos of nuclear physics, which are of minute mass and seem not to affect other particles but which have mysterious powers. There is only one way you can penetrate the mystery. Before playing an idle card, you should consider what the effect of playing it may be. We begin with an ordinary hand, where the bidding was simple and direct. 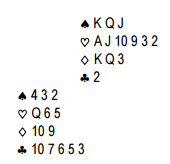 Q and leads a diamond to the Ace in his hand.

WHAT IS YOUR DISCARD? Clearly, a heart would be suicidal, a club, too might be dangerous. So it seems safe to throw a spade, an idle card. Safe? You have just killed the defence! This is the full deal: 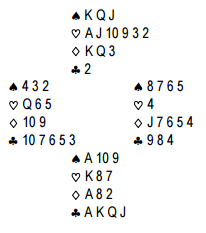 After the first three tricks, declarer intends to run four clubs and three spades. When West shows out on the third spade he will learn that West was dealt three. He already knows that West had two diamonds. So now he will know that West had exactly three hearts. South will therefore easily pick up your unfortunate

To give yourself a chance, you had to keep your spades intact, discarding a club instead on the third diamond and leaving South with a complete guess. East, too, had to take care of his idle cards. When the fourth round of clubs was played, he had to discard a diamond, not a spade. A discard of a spade from either defender allows declarer to find out the spade distribution and hence the distribution of the entire hand. Like neutrinos those “idle” spades had mysterious and unexpected powers. Now take a hand from the 1994 McAllen / Sunday Times pairs: 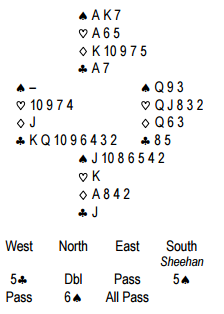 Robert Sheehan as South was one who found a successful line of play. He won the club king lead with the

A, ruffed a club — noting East’s echo, and cashed the

K, West discarding a club. Faced with a trump loser, Sheehan set out to partially strip the hand before putting East in. He cashed the

A, and ruffed a heart, and then exited with a trump, leaving East on lead in this position:

East had no more clubs and clearly did not want to open diamonds, so he led a heart, a “neutrino”, THEREBY DISCLOSING WEST’s FOURTH HEART! Sheehan could now place West with 0-4-1-8, so he ruffed  in his hand and played a small diamand. He called for dummy’s

K and continued with a finesse against the queen to complete the good work.

Again, the play of the “idle” heart sabotaged the defence. EAST MUST RETURN A LOW DIAMOND, accepting the risk of leading into the tenace, should South hold the

J. Had East done so, South would have had to guess. And if you look at the hand closely, you will find that he will go for the losing line more often than not. So, my BOLS tip is this: Don’t play an idle card thoughtlessly. Consider what the effect of playing it may be. If played at the wrong time, an idle card may betray your whole hand.

Placing the Lead by John Brown

Entries Equal Ruffs Plus One By Phillip Alder

8th March 2018
X
We use cookies to ensure that we give you the best experience on our website. If you continue to use this site we will assume that you are happy with it.Ok