The man who’s worthwhile is the man who can smile

when all his finesses go wrong.

South won the diamond lead in his own hand and promptly lost the spade finesse. East led back the three of hearts South played his king and West plunked down the ace. South still had to lose the club finesse, but that didn’t stop him from smiling as he scored game and rubber.

East wasn’t smiling at all. He pointed out to West that if West had just let South’s king of hearts hold, East would still score his king of clubs and West would make two heart tricks instead of just one.

East’s analysis was correct, but he should have blamed himself, not poor West. It is usually the right play to lead fourth best, but not always.  This time East should have led the nine of hearts, not the three. This would tell his partner that he (East) held no higher heart, West would have known that he should duck and East and West, not South would have wound up smiling. 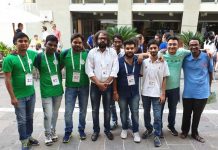 4th October 2017
X
We use cookies to ensure that we give you the best experience on our website. If you continue to use this site we will assume that you are happy with it.Ok