The views contained in this article are solely those of the author. The editors take no responsibility for any distress that may be caused to the subject of this article by random unsubstantiated implications.

The European and world champion English Ladies team has been honoured by being invited to take part in the prestigious Yeh Bros Cup. However, this pales into insignificance compared to the honour extended to me — a mere male – who has been invited to represent the English Ladies. Five members of the regular team were able to come to this tournament. The sixth, Susan Stockdale, could not get time off work, and we all know how messy teams of five can be (not to mention issues of how to line up five players in the pairs event if they fail to qualify for the later stages of the teams event). So I was asked to partner Fiona Brown. Fiona and I had never played a board together, so we agreed to play the one-day British Mixed Pairs Championship last month. As I always play professionally in the UK, this meant that I was going to have to give the English Bridge Union some of my hard earned money — for the first time in 10 or 15 years. Well, we all have to make sacrifices at times, but I avoided breaking my run when my car was snowed in and I couldn’t make the event. Thus, with no over-the-table play together possible, we turned to BBO. I am not a big fan of Internet bridge, but have to admit that BBO certainly has its uses when it comes to partnership practice. And our second session threw up a deal which made the whole exercise worthwhile — or it would have if it weren’t for Ben Green. 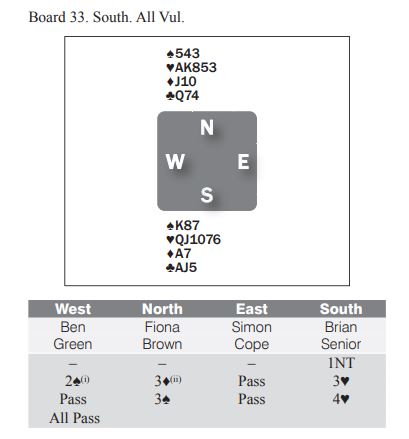 (i) Spades plus a minor
(ii) Hearts

Despite South’s five-card support for partner, it looks wrong to jump to 4

over the invitational-plus transfer, since the South hand has a lot of losers, an evaluation confirmed by the fact that 4

is indeed a poor contract even when partner has the extra values to drive to game. West, Ben Green, led the

K and I won the ace and drew trumps in two rounds, unblocking trump honours from hand, with West pitching the

Q on the second round.

What next? An inexperienced declarer might throw West in with a diamond, but even if West holds king-doubleton of clubs, and so can never lead the suit, the three-suit endplay is an illusion. West could, for example, exit with the ace and jack of spades, win the third spade, and give a ruff and discard in either spades or diamonds and score his

K at the end. Thus, after drawing trumps it is correct to lead a club to the jack and when it wins cash the ace, then exit in diamonds.

At the table Ben returned the

J, but I won the king and exited with a spade. Even though Simon Cope held the

9 the defenders could do no better than choose which one of them would take two black-suit winners and then concede a ruff and discard, on which the last loser would disappear. 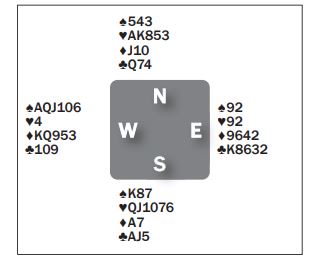 Can you see how the defenders might have made my life more interesting? Green needed to exit with a third diamond after winning his queen. Declarer throws a club from dummy, and (if West is going to remain on lead, he pitches a spade from hand and West has to surrender. If East is going to win the diamond, declarer ruffs high, ruffs his last club in dummy, and advances the heart eight, underplaying the seven from hand. This is the new position with West still to play: 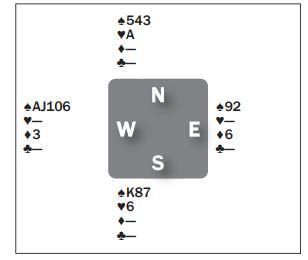 West can afford to discard neither a high nor a low spade, so he must pitch his diamond. So now declarer cashes the last trump and West is caught in a one-suit squeeze. If he
keeps the AJ10 South ducks a spade to him and he is endplayed. If he throws another honor away, East will put up the spade nine but declarer covers, and the spade eight
becomes the tenth trick.

So now you see why I hate Ben Green? He robbed me of the chance to play a one-suit squeeze and get my name in the newspapers; I guess this column will just have to do.
(This article originally appeared in the Daily Bulletin at the Yeh Bros Cup in Yokohama last April and is repeated by popular demand of Ben Green’s adoring fans.)

BBO: Building a Fence Around Partner By Joshua Donn

23rd October 2018
X
We use cookies to ensure that we give you the best experience on our website. If you continue to use this site we will assume that you are happy with it.Ok