Alphonse Moyse Jr. of New York recently became the fourth person and the first American to be named an honorary member by the International Bridge Press Association. Sonny Moyse is the dean of American bridge writers, the senior member of a small army of ghosts whose columns bore the name of Ely Culbertson. For more than 20 years (1934-56), Moyse produced 14 syndicated newspaper columns a week—he wrote those signed by Josephine Culbertson, in addition to those signed by Ely—and for sheer volume nobody else comes close. During this time some masterly contributions to the theory of the game appeared under his own byline.

Even today one need only listen to Moyse argue, or reread a hearty sampling of his writings, to discover that he takes his bridge seriously. In fact Moyse is so fond of a good argument that one may still hear the rumble of his deep voice raised on either side of a bridge debate—as long as he is not required to defend the complex maneuvers of those players he contemptuously refers to as “the scientists.” Sonny is a stern traditionalist when it comes to bidding methods. Indeed, his most enduring fame may rest on his unshakable advocacy of opening bids on four-card major suits. To defend his position, Moyse frequently cited instances when a 4-3 trump suit triumphed where all else would have failed, with the result that this kind of contract became known worldwide as “the Moysian fit.”

Moyse’s most popular articles, which appeared from time to time in The Bridge World magazine, of which he was publisher and editor-in-chief when he retired in 1966, were a series of stories about the bridge exploits of his wife Jackie. No one, least of-all Jackie herself, has ever claimed that she shares her husband’s skill. Indeed, most of the yarns he has spun about her hinge upon the fortuity of her blunders. Here is one example.

Moyse was in a predicament, and it is difficult to see how he could have gotten out of it. As it was, Sonny rationalized. “It is just barely possible that in previous narratives I may have exaggerated the bridge prowess of my otherwise adored wife,” he wrote later. “If, in the past, I enthused over this bid or that play of hers, it is conceivable that I may have embellished. Now my chickens are coming home to roost.”

So his wife played, and there ensued a series of astonishing results. Here is how Moyse described the culminating hand of the game, on which Jackie was the declarer. 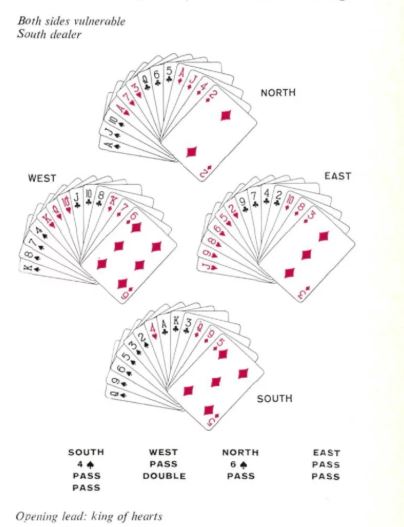 “I spread my hand, and after one look, Jackie jumped six inches straight up! What was the spade ace doing there when she had it? To my horror, I saw her amazement change to consternation and then saw her pick out two cards and transfer them hastily to the other end of her hand.

“But now that Jackie had found the explanation to what had appeared an eerie matter, she regained her aplomb, and soon my eyes were popping to the finest performance of even her distinguished career. She took the heart king with the ace and, perhaps because she loves to ruff, ruffed a heart. She also loves to finesse, so she promptly finessed for the spade king. When my 10 held she was so pleased that she looked on East’s failure to follow suit as merely another ‘detail.’ A second heart ruff and a second spade finesse, to the jack, reduced her to the queen-9 of trumps.

“It is no part of my intention to claim that my wife takes smother plays in her stride. It is worth observing that she could have cashed the spade ace, cleaned up the clubs, then thrown West in with the spade king, forcing a diamond return from the king. But, as compared with that humdrum routine line, Jackie’s technique was a work of art.

“She did not cash the spade ace. She cashed the clubs, ending in her hand.”

Moyse’s story goes on but suffice it to say that Jackie next led the queen of diamonds, which was covered by the king and won with the ace. Next came the jack of diamonds and a low diamond. East was in and no matter what he returned, West was unable to make a trick with his guarded spade king after Jackie had trumped, even though dummy’s ace was alone.

When the hand was done, Sonny raved: “A smother play, a smother play. Why, Baby, do you know that there aren’t more than a couple of hundred players in the country who can execute one of those?”

That ended the rubber and the story. No doubt I have done less than justice to the Moysian flavor by quoting from only a part of one of his many Jackie stories. But perhaps some day soon they will all be collected into a book. I for one will want a copy. Autographed by Jackie, of course.

Establishing a Long Suit in a Trump Contract By Debbie Rosenberg