There is, of course, far more to good declarer play than merely knowing and following the odds with various suit combinations. Often, other aspects of the deal mean that declarer cannot afford to play a suit in isolation. Monday’s Round 5 of the OCBL Open League 2 featured this deal, and a combination which I cannot remember ever having actually had to handle at the table. 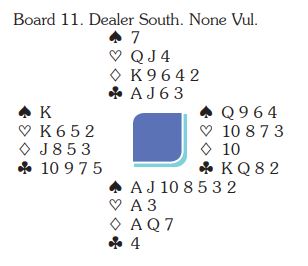 There were many different auctions, the most popular being 1

, against which the most popular lead was a club to dummy’s ace.

Now, what is the correct way to tackle the trump suit?

Nineteen of our 32 declarers led dummy’s seven to either the ten or the jack. That lost to the bare king and there were two more trump tricks to be lost. With East getting in and pushing a heart through to West’s king, that usually led to the contract being defeated.

Six declarers simply laid down the ace, the fall of the king meaning that they had only two trumps losers so made their contract. Three of those who laid down the ace had received a diamond lead and now the threat of a defensive ruff made a finesse look too dangerous – lose two trump tricks to West and one diamond ruff to East, perhaps.

Four Wests led a heart and now it didn’t matter how declarer tackled the trump suit as he had no outside loser so could afford to lose three trump tricks.

And then there were the seven declarers who know their suit combinations. After receiving a club lead, they led the seven of spades and ran it! That lost to the bare king but now there was only one more trump to be lost and the contract was home.

Assuming no defensive ruffs, the contract is always secure if trumps are three-two. When they are four-one, cashing the ace loses out to singleton six or four, leading to the jack or ten loses out to the singleton king or queen, while running the seven loses only to the singleton nine. In other words, running the seven fails only half as often as either of the other plays. It also has the benefit that you are still in the game should trumps split five-zero, where either of the other plays dooms you to defeat.

IT can be Easy to Overlook Something by Liz McGowan

Missing the Point by Mark Horton