At the turning of an hourglass in an angel’s hand, a rooster crows three times and eerie bell music rings through the Cathédrale Saint-Jean in Lyon. The mechanical spectacle comes from an astronomical clock that has been keeping the time and the path of the stars since the 14th century. The clock is one of the oldest in Europe and has an astrolabe that indicates the date, the position of the moon, the sun, and the earth, as well as the stars in the sky over Lyon. Created in the age of geocentrism, the sun is shown circling the earth. An astronomical clock was first documented in the cathedral in 1383. It was almost completely destroyed during a 1562 raid by the Baron of Adrets during the War of Religions, and in 1661 was reconstructed by master Lyonnais clockmaker Guillaume Nourrisson. During the French Revolution, all ornamentation that referenced royalty, like coats of arms and fleur-de-lys, was stripped from the clock. The last restoration was in 1954, when the clock’s perpetual calendar of 66 years was reset. It will be accurate until 2019.

What was no mechanical were these two boards from the third round of the world bridge teams championships, in Lyon. 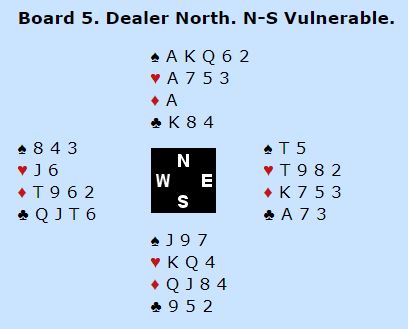 Thoma found the only lead to defeat immediately the contract. The

Q won the first trick, the

J the second and finally the

A won the third trick. Finally declarer made  only 10 tricks for one down.

The big difference here was that now North was the  declarer,  and no lead could defeat the spade game and even 5

Declarer won the lead with his ace, played three rounds of trumps finishing in the table, continued with a diamond to the ace and cashed the

Chagas continued with a heart to the king, and let run the

Q, Karakolev won the trick but again he couldnt play a club so he returned a heart. Finally declarer lose only a diamond and a club and fulfilled his contract with one overtrick. 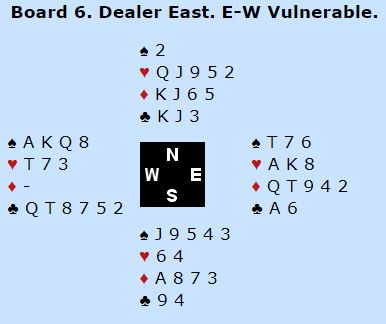 Declarer won the lead with his

A and continued with a club to the

10, North covered with his

J and returned the

Q. Ravenna won with the heart king, cashed three spades but finally had to go three down.

Chagas won the lead with his

K and returned the

A  and returned a third diamond. Finally declarer made: three spades, three hearts, three diamonds and a club for +430 and 14 IMPs for Bulgaria.

The Plan XLIII by Tim Bourke

8th December 2017
X
We use cookies to ensure that we give you the best experience on our website. If you continue to use this site we will assume that you are happy with it.Ok