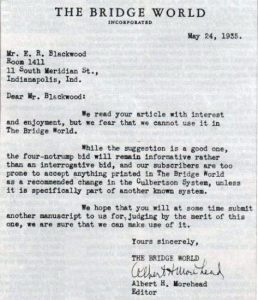 As we know the Blackwood convention is currently of universal use: is part of almost every known and unknown bridge bidding system. Above you can read the letter sent to Easley Blackwood by The Bridge World when he sent them the Blackwood Convention to be published by the magazine.

For a better understanding of the letter is important to remember that in 1935 the United States used the Blue Book version of the Culbertson System. In that system the 4NT bid had a double meaning:

1) the possession of three aces

2) the possession of two aces and the king of one of the suits named by the partnership.

Guidelines to bidding hands that don’t fit with partner’s

Stay low on a Misfit

24th November 2017
X
We use cookies to ensure that we give you the best experience on our website. If you continue to use this site we will assume that you are happy with it.Ok