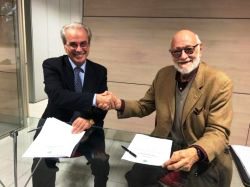 The two Presidents signed the contract. Salsomaggiore Terme hosts for the second time the World Youth Teams Championship, after the 16th edition held in 2016.

Salsomaggiore Terme is the House of the Italian Bridge and is very well known also by the bridge players everywhere in the world, having hosted several very successfull international championships:

This wonderful town, dipped in the green of the Parma hills and the Palazzo dei Congressi, with its unique and hand painted Liberty decorations, are ready to welcome once again the youth bridge players to enjoy another marvelous bridge adventure.