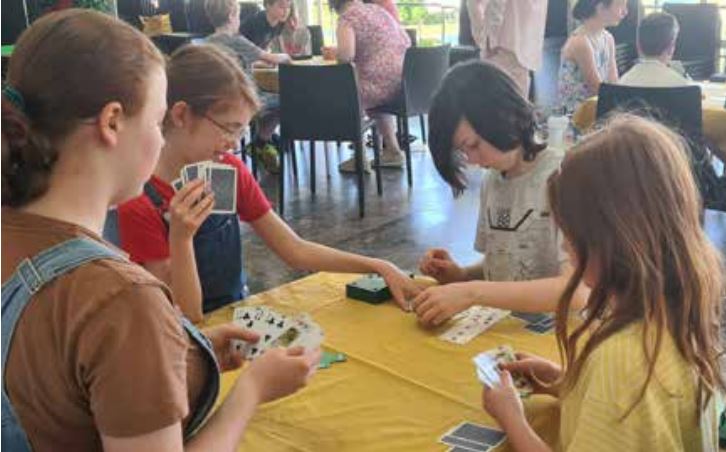 What better way to spend one’s school holidays than sitting at a table, learning bridge? For 22 students (and one teacher) in Adelaide, this was the activity of choke. The SABF coordinated a free kids’ bridge program designed to teach 8 to 17 year olds the basics of our fantastic card game. Barbara and Lauren tray’s, with the assistance of Penny Bowen, Peter tumbull, George Bartley. Bertie Morgan, David Gue and Jamie Simpson, taught the four-day program at Bridge at Beaumont.

The kids came from all over Adelaide (and two from Sydney) and were generally grandchildren of club bridge players, with a couple of Lauren’s students thrown in. They learnt mini bridge, followed by opening bids, raises, other responses and some card play techniques. Lots of them practiced at home in the evenings and one even taught her parents a few tricks! It seems that we already have some bridge addicts. So watch out for the South Australian Youth Team in a few years’

Hugo, age 9 and a half, said ‘It was great! I loved it. It was exciting to play a new game invoking numbers, pre-dictions and logic. And there are teams in bridge, two teams of two and it helps you figure stuff out. In short, I really liked it!- (Hugo, unprompted, took a finesse on the first hand he declared. When complimented on his finesse he said that he didn’t know what it was but that his play had seemed obvious. We look forward to seeing how long until he executes a squeeze).

We managed to hold one of the three planned ‘mentor’ sessions on a Tuesday morning, with five of the youngsters playing. Once again, the kids exceeded our expectations, with one opening with a weak two, despite not yet having had any lesson on the topic! (Apparently, back in December, more than a month ago, he’d asked about two level and higher opening bids.)

The first Youth Sunday was held Sunday 30 January, with seven of the group (and more to return in due course).

We had one newcomer, who had taught himself bridge by reading Paul Marston’s Introduction to Bridge. His partner opened 1NT and, with a 5-5 in the majors, he asked if he could transfer. Unfortunately, his RHO overcalled 2

, thwarting his plans. Naturally, we’d have had to teach the rest of the table transfers as well. Meantime, at the other table, there was a 1NT opening bid and Stayman was used. It’s going to be a challenge to keep up with their knowledge. (We hadn’t taught them any responses to 1NT openings yet.) The two-hour session was long enough, especially allowing for some fatigue from the kids having watched Ash Barty win the Australian Open the night before.