The youngest member of the Swedish Venice Cup squad, Sanna Clementsson, brought off a nice squeeze and endplay during the third session of her team’s comfortable semifinal win over England. This was the deal: 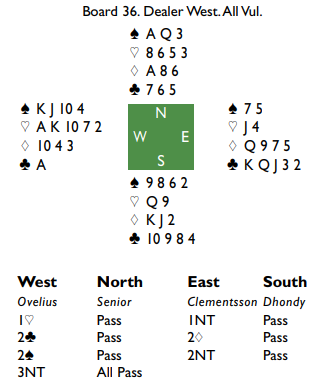 showing game values facing the strong variety and the rest of the auction natural.

Heather Dhondy led the ten of clubs, Nevena Senior playing a discouraging seven. Now, according to the BBO record, declarer won the ace of clubs and led the ten of diamonds at trick two, with Senior shooting up with the ace to lead a club through. Even with the heart onside, there were only eight tricks so the contract was one down.

However, the BBO record is actually a complete fantasy, and the actual play was much more interesting. Clementsson did indeed play the ten of diamonds at trick two but Senior did not play the ace. Instead, she played low and Dhondy won the jack. She played a club so declarer was in hand and could cash all four club winners.

Clementsson discarded one heart, one spade and two diamonds from dummy, and Senior had a problem. For her last seven cards she needed to keep two spades, four hearts and two diamonds, and even for a double world champion that was not possible. So Senior bared the ace of diamonds to keep both her major-suit guards intact.

Clementsson led the jack of hearts to the queen and ace, cashed the king and ten of hearts, and exited with the fourth heart. Senior could win and cash the ace of diamonds, but then had to lead away from the

AQ to concede the ninth trick to dummy.

And if Senior had thrown the

A to keep her small diamond, thereby preserving communications with partner?

Then, after leading the jack of hearts to the queen and ace, Clementsson could have played a spade and established her ninth trick in that suit before establishing North’s

As it turns out, the killing defence was to play as in the fictitious BBO record, rising with the ace of diamonds. Even if the defenders do not immediately cash out their diamond and spade winners, instead playing a club as in real life, the fact that North can keep a small diamond without having to throw away the third defensive diamond winner means that the contract should be defeated.

Dummy Reversal does it by Oswald Jacoby