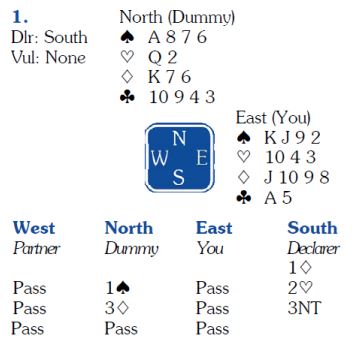 Your partner leads the club two, using fourth-highest in principle. How would you plan the defense? 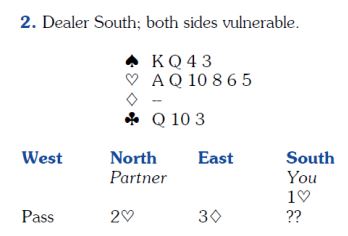 What would you bid now?

Find your own solutions before reading ours:

Your partner leads the club two, using fourth-highest in principle. How would you plan the defense?

West leads the two of clubs. After winning the first trick with the ace of clubs, which card should you, East, lead at trick two?

The number one factor that separates experts from less good players is the amount of counting that they do. The more counting, the better. And counting starts during the bidding. From the auction, you know South presumably has four hearts and at least five diamonds. From partner’s opening lead, showing exactly a four-card suit, you know declarer has three clubs. This means South probably has 1-4-5-3 distribution.

Does this point you to the right answer? Correct — you should switch to the king of spades, just in case declarer has a singleton queen. Having diamonds under control, your side should be able to win five tricks before South collects nine. Even if partner has the king-jack of clubs, the suit can wait. With the given layout. that’s exactly how the deal works out. Declarer ducks a couple of spades, wins the third round with dummy’s ace, and tries to run the diamonds. When they don’t break, he has to dislodge the king of clubs to get out for down one.

What would you bid now?

At the table. South jumped to four hearts. But then, when West competed with five diamonds. South did not know what to do. His four-heart jump had assumed captaincy, so North was not being asked to offer an opinion. When you have a two-suited hand, find a fit in your first suit, and the auction is competitive, bend over backwards to show your second suit. Here, South must bid three spades.

This would have made it easy for North, who held:

He would have bid five hearts, which was unbeatable.

Seven Card Suits Should be Trumps by David Gold

10th September 2017
X
We use cookies to ensure that we give you the best experience on our website. If you continue to use this site we will assume that you are happy with it.Ok