The 1999 Levendaal Award for Best Play by a Junior

Third generation Lizzi and Jørgen-Elith Schaltz were some of the hot bridge names I read about and learned from, when I was a junior player. Lizzi won the European Ladies Team title several times, and her husband played on our national team as well. For a couple of years my partner was Peter Schaltz, their son, and in 1970 I was his captain when he and his team won the European Junior title in Dublin.

Since then Peter has for many years played on our national team with different partners, among them his wife Dorthe and his cousin Knud-Aage Boesgaard.

Dorthe and Peter are still competing in the Danish first division, but their chances to represent Denmark again maybe have decreased a little. No problem at all — the third generation is ready to take over! Meet 14 years old Martin Schaltz in this fascinating hand from a recent club evening. 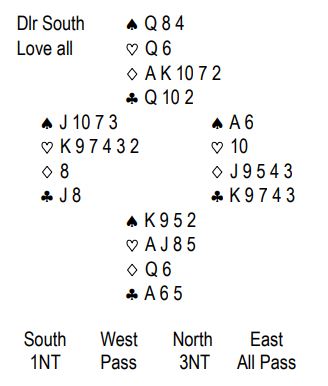 West led his fourth best heart, won by dummy’s queen, and after a diamond to the queen the next diamond trick told Martin that he had to work for it. So he did! The K took trick 3, and a heart to the 8 endplayed West on the 9. He elected to play the

J, which was taken by the

K, and a spade went to the

8 and the bare ace. Now it was East’s turn to be thrown in! A low club went to the jack and queen, and before Martin cashed the

Q this was the picture: 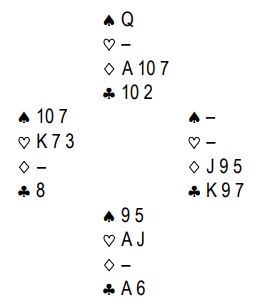 Look what happens to East when the

Q is played. If he throws a diamond, declarer will cash the

A and continue with a diamond, thereby making his third end-play. Therefore East had to throw a club, but it didn’t help him very much. Instead Martin played a club to his ace, discarded a diamond on the

A and threw East in with the

Dummy’s A-to in diamonds took the two last tricks. 3NT made with an overtrick. Two end-plays and a throw-in squeeze in the same hand … I guess that we will meet Martin at the international scene very soon.