Though the name does not include the word Coup, a Smother Play clearly belongs to that category of play technique. It is another piece of bridge magic in which a defender’s ‘sure’ trump trick vanishes into thin air. Like a number of the coups we have seen recently, the Smother Play is a rare beast, but magic tricks have a fascination for us all and it can come as quite a shock to the defender on the receiving end. 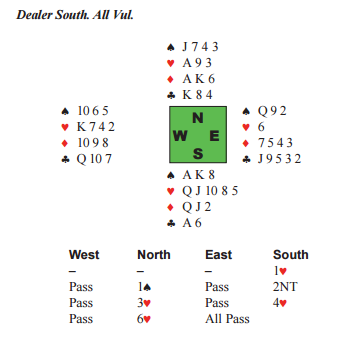 Six Hearts is a borderline contract which will succeed whenever declarer can avoid a loser in one or other major suit. She wins the diamond lead in hand and advances the queen of hearts. It holds the trick so declarer continues with the jack. When East shows out West is marked with a trump trick so it appears that declarer requires the queen of spades to fall under the ace-king.

Declarer abandons the trump suit and cashes the top spades – no luck. Is there any hope remaining?

Declarer cashes the remaining diamond winners then plays three rounds of clubs, ruffing. Now she exits with the losing spade. East wins the spade queen and has to return a minor-suit at trick twelve. Declarer is down to

A. Declarer ruffs, perforce, and what is West to do? If she plays the

K dummy over-ruffs and declarer makes the last trick in hand. If, West underruffs, dummy’s spade is discarded and the

A wins trick thirteen. The sure trump trick has been smothered.

Declarer needed some good fortune to balance the bad. Had East held a fourth spade, she could have led it and West could over-ruff declarer while dummy had to follow suit.