The Crocodile Coup is a defense coup, specifically by the second hand that’s playing the trick. The second hand must play a card higher than necessary to win the trick, getting the lead, and so preventing his partner to be endplayed.

After the semifinals of the Brasileiro Pairs Championship, Bahia 2013, a group of players met to discuss the most interesting boards of the session, when this gem appeared: a defense by Joaquin Pacareu (GSM) and his partner Gonzalo Rubio (SM) both from Chile.

10 lead, dummy played a little heart and Gonzalo won the trick with his

K to switch to the

3 showing an odd number of cards….

Gonzalo: When I played the

3 Joaquin must have thought that I had: 5 clubs, a trump singleton and 7 red cards. 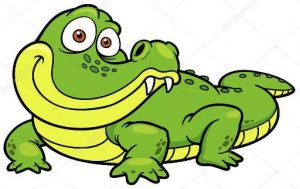 Now declarer, with confidence, decided to try the club finesse, bad news… Joaquin won with his

K and played another club, dummy played a club and Gonzalo played his

J, winning the trick and continued with the

K and switched to a club, his intention was to ruff with a little trump, but Joaquin overruffed with his

A and switched to a heart.

Gonzalo won with the

A and played the

J. Declarer ruffed with his last trump and played the

Q preventing his partner to be endplayed. The Crocodile Coup!

At the end Joaquin won the

9 and returned a diamond. Declarer had to lose the

K for three down.