The Junior European Championships was currently in progress in Albena, Bulgaria, and the bidding was entirely in keeping with the fearlessness of youth.

Today’s deal from the Girls series may well set some kind of record. Game all, dealer North: 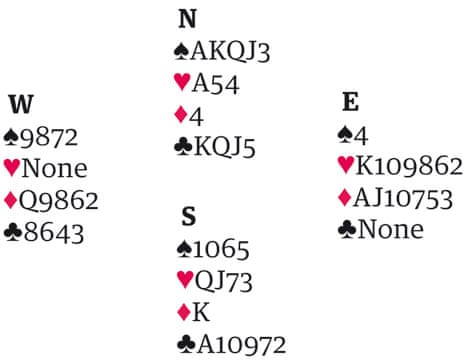 Poland and the Netherlands won the gold and bronze medals respectively, and this hand had a lot to do with that when the two countries played against each other. When the Poles held the North-South cards, this was the bidding:

(1) The Polish Club – either a weak no trump or a very good hand. (2) Both red suits (3) An attempted lurk, hoping to disguise the extent of the East-West diamond fit and induce the opponents to double at too low a level. (4) Happy to allow partner to double if that was what she wanted to do. (5) Unlurking slightly. (6) Showing the “very good hand” variety of the two-way opening. (7) Forcing, inviting North to double or bid on. (8) A slam try. (9) Intended as Lightner, asking for an unusual lead – in this case a heart, which would have led to a defensive cross-ruff and a penalty of 800.

West’s ingenious effort on the final round of bidding fell on deaf ears. East laid down the ace of diamonds and on seeing dummy switched to a trump, so the Polish declarer made her contract for a score of 850. But the swing of 1650 points on a misdefence is not any kind of record.

At the other table, North for the Netherlands opened the bidding with a natural one spade. East overcalled two spades to show hearts and a minor, and the bidding developed at a frenetic pace before the Polish East player decided that her opponents’ contract of five spades might very well make, so she “sacrificed” over it in six diamonds. Some sacrifice – the opponents could not beat the slam, and Poland recorded 1540 at this table to go with 850 at the other for a swing of 20 IMPs. But that is not any kind of record either. The thing about this deal is that the side with 10 points could make a slam, while the side with 30 could make nothing above the two level. That’s a record.