In bridge, the Law of Total Tricks (or simply “The Law”) is a hand evaluation method for competitive auctions. Technically stated, the total number of cards in each partnership’s longest suit is equal to the number of “total tricks” that either side can win in a suit contract.

This is pretty wordy, so I think it’s best to jump into some examples… 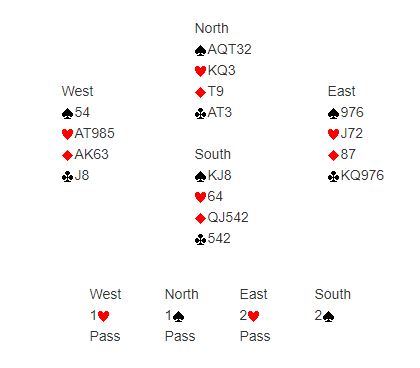 This is a typical Law deal. East-West have 8 hearts and North-South have 8 spades. 8 hearts + 8 spades = 16 total trumps. That number happens to be the combined number of tricks that can be made in 2

, West would make exactly 8 tricks after losing 2 spades, 2 hearts and a club. In 2

The principle is the same if we move some cards around: 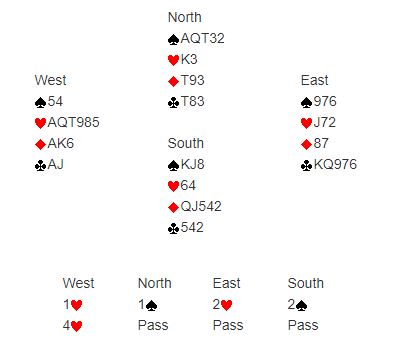 , West will win 11 tricks against best defense, losing only 2 spades. If North were allowed to play 2

, he would only win 6 tricks; East-West would score 2 diamonds, a diamond ruff, 3 clubs and a heart. 11 tricks + 6 tricks = 17, which is equal to the total number of spades and hearts in the deal.

The bidding in the above examples was clear-cut, with or without the Law. So let’s look at a hand in which the Law may actually influence the bidding. Sitting East, you hold:

Playing a natural 5-card major system, you have already described your hand with 2

, and it may seem obvious to pass. But the Law would actually suggest bidding 3 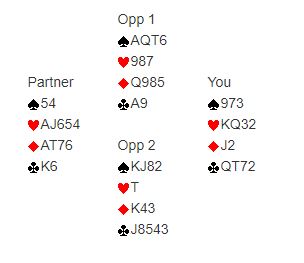 The opponents hold 8 spades, while your side holds 9 hearts. 8 + 9 = 17, so the Law says there should be 17 total tricks available. Therefore, if the opponents can make 2

This leads to the most important application of the Law…

Bid Your Number of Trumps

In my experience, this is most common and critical at the 2- and 3-levels. If you and your partner have an 8-card fit, then you are usually safe to compete to the 2-level in that suit. And if you own a 9-card fit, then you’re usually safe to compete to the 3-level. The contract will either make, or be a good sacrifice against whatever the opponents can make.

Two Signals to Help Your Defense

20th March 2018
X
We use cookies to ensure that we give you the best experience on our website. If you continue to use this site we will assume that you are happy with it.Ok